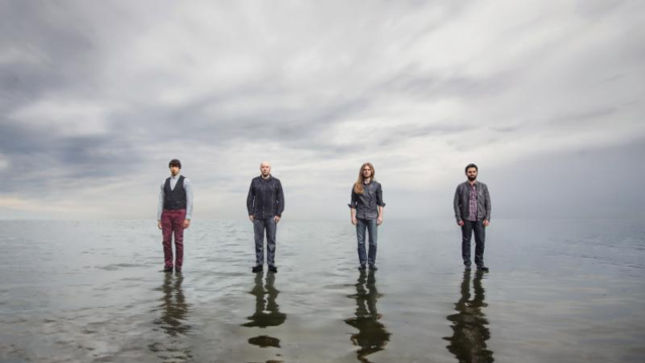 New Haven-based progressive ensemble, Earthside, will release their debut album, A Dream In Static, on October 23rd. A new track, "Crater”, featuring guest vocals from Björn Strid (Soilwork), can be streamed below courtesy of Yahoo! Music.

Drummer Ben Shanbrom commented: "There is a side to the pursuit of dreams we don't as a society like to think about - sacrifice. The people we let down, the friends we hurt, the many doors that close on us in the name of our own pursuits - naturally we can't have it all, and this pain has to be accepted and understood for us to move forward. “Crater” is the wistful realization of this life of sacrifice, and Björn nailed these feelings in such a profound way on this song. He is absolutely one of the most breathtaking rock/metal vocalists in the world scene, so we couldn't have been happier to have had him on board for this, especially on a song that features his talents in such an unusual way.

"Writing “Crater” with our guitarist, Jamie, was an incredibly meaningful experience to me and one of the most profound educational opportunities I've had in the musical realm. For years I had been frustrated piling up song ideas, but feeling, as a taught-by-ear drummer, as if I had no means to properly present them to others. By identifying what my favorite musical concepts were and directly applying them to a piece of music I was working on, Jamie helped me to form a much a stronger theory background than I had ever obtained in an academic setting. This is how he teaches his own theory students and it is an awesome model!"

"Earthside is excited and very proud to finally be releasing our debut album A Dream In Static," commented keyboardist Frank Sacramone. "This record has been incubating for several years now between initial writing and demoing all the way through nailing down a release date. Along the way we've worked with so many different artists across disciplines and across continents. Now the fruits of our global project finally get to see the light of day and hopefully move listeners in a similarly meaningful way as the music moved us and our collaborators. We can't wait for you all to hear these songs and to get out on the road and perform them for you guys."

A Dream In Static tracklisting:

Through organic layers of living, breathing orchestra and an eclectic arsenal of world music-influenced instrumentation, Earthside fashions an ever-changing sound that is equally engrossing alongside a work of cinematic art as it is resonating throughout a densely packed concert venue.

A Dream In Static, the group's conceptual mission statement, is a story of purposeful sacrifice and existential yearning told across sweeping instrumental movements, interwoven with adventurous vocal compositions featuring premier voices from across the rock and metal worlds.