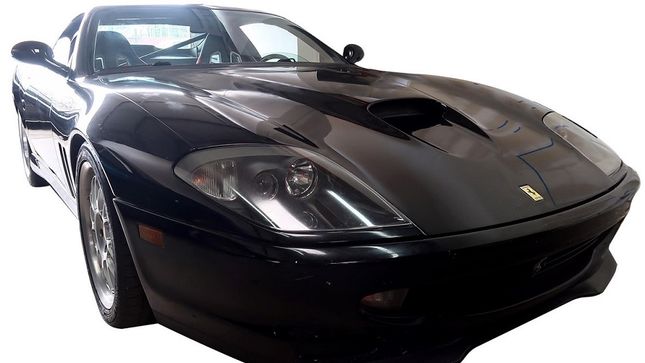 A description reads: “Here's an opportunity of a lifetime to own something that belonged to Guitar God Eddie Van Halen. His 2000 550 Ferrari custom 6 speed race car with only 28,000 miles. Imagine owning and driving Eddie Van Halen's Ferrari! This is the ultimate collector's item. The Ferrari is in excellent working condition. VIN ZFFZS49A7Y0118483, and has been maintained and treated with care. The car has been serviced by the top Ferrari mechanic. The seats were custom racing seats ordered specifically by Eddie so he could race with his brother! The Ferrari comes with the original registration in the name of Edward Van Halen and an original renewal in Eddie's name. This Ferrari can be the highlight of any collection, museum, or car show! Also comes with a Gotta Have Rock & Roll® Certificate of Authenticity.”

"Eddie Van Halen’s death is an enormous loss to the guitar community. While there will never be one indisputable Best Guitarist In The World, no one can deny that Eddie changed the face of rock guitar. His contributions to guitar technique, guitar and amplifier design, and songwriting, are some of the greatest of all time. Here are 10 ways Eddie changed the game for every guitar player who followed."

Check out an excerpt from the rundown below.

"Some virtuosos forget the power of a simple song and a catchy hook, but EVH knew when to keep things simple. 'Ain’t Talkin’ ‘Bout Love' (from the debut Van Halen album) is played by palm muting and picking the notes from an open A-minor chord. The singable solo is played on one string. Melodic genius."

"Michael Jackson and producer Quincy Jones wanted rock credibility, and there was only one name to call. Eddie hung up on Jones three times, believing him to be a prank caller. Once in the studio, EVH nailed the solo on the second take and refused to take any payment."

"Almost all would-be Eddie clones lacked two things: the groove and the sense of fun. It don’t mean a thing if it ain’t got that swing, as Eddie and Alex learned from their father, a virtuoso swing clarinettist. 'Hot For Teacher', from 1984, is as funky as Chic, but at 260 bpm."