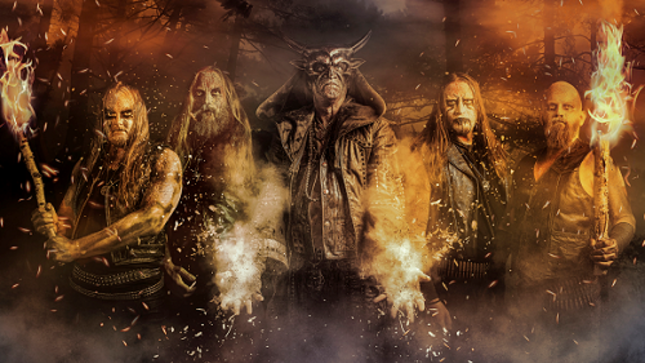 With less than a month to go to until the January 22nd release of The Archer, Fjord And The Thunder, thr third full-length album from Endezzma, Dark Essence Records have provided a further glimpse  into the darkness the Norwegian Black Metallers are so adept at creating with the release of a new single taken from the album, along with an accompanying lyric video.

The band point out that with its powerful build up to the climax, the video is the perfect visual accompaniment to the track:

“'Wild Glorior Death' is a true manifest and a real gate to the core of the mythical and philosophical depth of the album. In this song you find the essential battle of strength, untamed forces and the unbound darkness. A rapture of oppressive sonic splendour visualized by the video that follows the track. The journey builds up through a real violent and epic storm and through the thunder the listener will experience that the song represents the turning point in the storyline of the album. The Archer claims his throne through 'Wild Glorior Death'.”

With The Archer, Fjord And The Thunder, Endezzma have taken massive strides with their song writing, and have produced an album that bridges the gap between dark anthems and primitive aggression.  Recorded at the Vika Studio and the Malpherno Studio in Norway, the album was  mixed and mastered by Tore Stjerna at the Necromorbus Studio in Stockholm. Artwork is by Stefan Todorovic / Kahos Diktator Design, and the tracklisting is as follows:

"The Awakening"
"The Name Of The Night Is A Strong Tower"
"Anomalious Abomination"
"The Archer, Fjord And The Thunder"
"Formless And Void"
"Garden Ov Heathen"
"Wild Glorior Death"
"Open Your Eyes And Stab The Sight"
"Arrows Of Equilibrium"
"Closure"