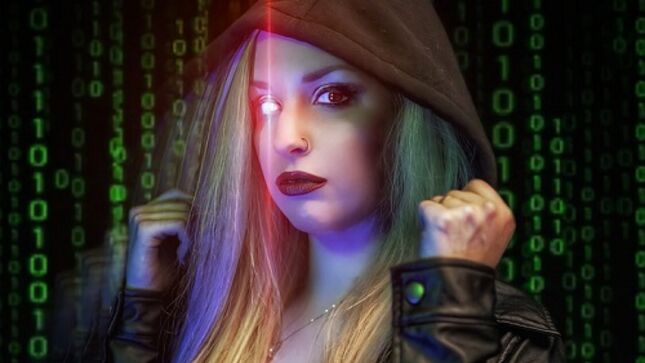 Female-led Eternal Frequency has released their anthemic new single and video for “Step Up”. Drawing inspiration from cult classic films such as The Matrix, Blade Runner, and The Fifth Element, the visuals for “Step Up” paired with the track’s quick-paced, industrial instrumentation and structure creates a high-intensity experience.

While the group’s sonic influences such as Spiritbox, Halestorm, and In This Moment may be evident through their releases, lead vocalist Emelle set out to create an empowering anthem focused on the music. With lyrics such as, “Little do you know / Glass ceilings can break,” Emelle erupts into the chorus that displays her full vocal prowess.

“Lyrically and melodically, I wanted to convey the hardships of being a woman in the rock music industry and how it is so easy to be pigeonholed and oversexualized when the music is what should matter the most,” Emelle explains of “Step Up”.

Jumping into the “Step Up” music video is nothing short of tumbling down the rabbit hole similar to the plot of The Matrix. The visual opens in a dimly-lit alley where Emelle walks toward a body bag lying on the ground. Neon images flash behind her on the walls similar to the post-apocalyptic cityscape in Blade Runner and CyberPunk.

Adorned in all black with her hood up, Emelle zips the body bag and begins walking through the neon-clad streets before realizing she’s being chased by unidentified individuals. The video jumps back and forth between each band member running from the “hunters” and their performance of the track through green digital rain similar to The Matrix.

“As far as the video goes, [myself] and the other members of Eternal Frequency are prisoners of conscience on the run from an unknown organization trying to pick [us] off one by one,” Emelle explains. “The reasons on why they are wanted fugitives is unknown until the story begins to unfold throughout the video.”

“‘Step Up’ is chapter one of a fictional three-part series that [myself] and [guitarist] Justin envisioned as a short film while the songs were being written. The band must find out who is hunting them and why. Or maybe... just maybe... are the hunted actually the hunters?”

​​The “Step Up” music video was directed and edited by Tom Flynn, and the visual effects were created by Kyle Monroe. The track was written and recorded by Eternal Frequency, and produced by Carson Slovak and Grant McFarland of Atrium Audio.