Exclusive: INFRARED Streaming From The Black Swamp Album In Full 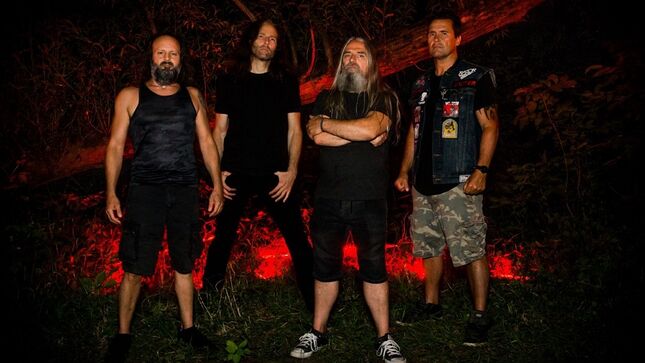 Canada’s Infrared has a new album ready for listeners who can tune into Bravewords for a heavy dose of no holds barred, traditional ‘80s thrash. The quartet of Kirk Gidley (guitar), Alain Groulx (drums), Mike Forbes (bass) and Armin Kamal (vocals/guitar) initially started on their journey back in 1986 and through trials, tribulations and a very long hiatus, they have arrived here with a third full-length album From The Black Swamp.

Infrared is the kind of band that writes exactly the songs needed for the album, working on them meticulously until they are up to standard. Each of the twelve songs is a standalone banger and cohesive with the rest of the album. A definite trip back in time, the band explains the album in their own words:

“With 12 songs and an hour of brand-new music, this album is the most personal yet. It is a rollercoaster ride of riff after riff, thundering bass, relentless drumming, and heavy lyrical content. The band hopes these personal songs resonate with fans and attract new listeners who share a love and passion for classic metal songs delivered with a modern touch and production.”

The songs on the album are a collaborative effort between the band members, it was produced, mixed and mastered by Kamal and the album artwork was done by Nate MacDonald. Infrared has shared the stage with bands such as Anvil, Sacrifice, Razor, and Venom Inc., and looks forward to supporting this album with a tour as soon as possible.

Staying true to their roots, this album is for those who like the ‘80s Bay area sound mixed with classic metal influences such as Maiden, Priest and Sabbath.

BraveWords is premiering the album stream ahead of its release on September 30: