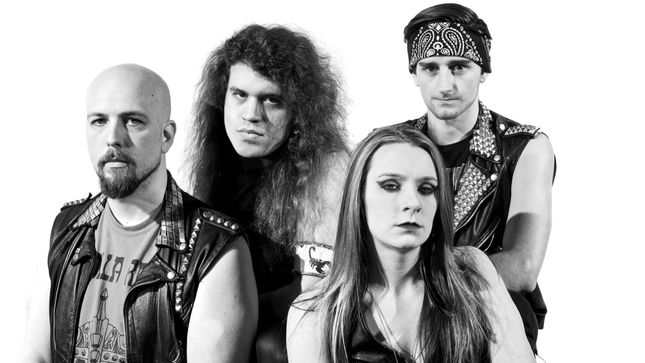 Inspired by legendary pillars of heavy metal such as Iron Maiden, Judas Priest, Scorpions, and Rush, Iron Kingdom is well known for their energetic and electrifying stage presence, as well as intricate musical melodies that bring listeners back to a time when the genre was in its prime.

Now they are back with a new album "On the Hunt" due out on October 4th, 2019, which is sure to remind people of the glory days of metal. With two new members in the lineup, there are new inspirations and approaches in the music while maintaining the traditional sound. They hope the album is well received by fans:

“We’re believing fans can expect the new record to be a lot more traditional in style, more accessible with a lot more rocker tunes, lots of catchy melodies and speed metal riffs, shorter songs, more packed with action, as opposed to the previous album with long epic passages. We wanted this record to include lots of great live tunes we can carry in our set for years to come!”

The nine new tracks are fun tunes that translate well into a live setting, which is paramount for Iron Kingdom who take great pride in their live show. Fans of the classic including Iron Maiden, Judas Priest, Queensryche, and Helloween will revel in Iron Kingdom who put a modern spin on traditional heavy metal. Teaming up with BraveWords, the Vancouver heavy metallers are excited to share the exclusive premiere of their new music video and second single “Road Warriors”:

The band adds: “‘Road Warriors’ embodies life on the road, it's a homage to those who tour often, and at all costs to reach their fans. This song was originally made somewhat from our experience of rolling our tour vehicle back in 2015 in the Rocky Mountains. We could have easily perished but circumstances allowed us all to survive. After purchasing a new ride we kept on touring. With a new lineup, a new album, and now a new music video, we can’t wait to take this show on the road, Smell the rubber burn, as we meet our destiny!”