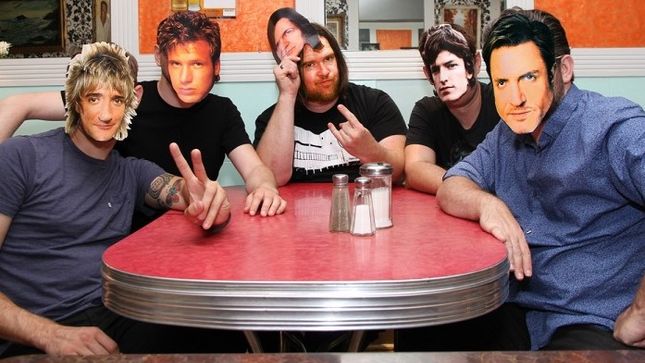 Moonlight Desires might only play ‘80s cover songs, but you’d be wrong to dismiss them as just another cover band. Formed by long-time Hamilton, ON musician Trevor Ziebarth (Actor/Writer/Composer on Teletoon's adult comedy series Sons Of Butcher), Moonlight Desires is his ode to the raunchy romances and youthful misadventures of summer’s past. By re-working synth laden pop hits of the 1980s, Ziebarth manages to turn familiar guilty pleasures into modern, guitar-driven rock anthems.

Joined in the studio by drummer Dave Dunham (Not Of, DAVIDS, ex-Chore, ex-Sons Of Butcher) and lead guitarist Marco Bressette (Dead Tired, ex-Threat Signal), their new album “Just The Hits: 1981-1985” transforms timeless hits such as “Sunglasses At Night” by Corey Hart and “Something About You” by Level 42 into party rock anthems.

"On our second album, Just The Hits: 1981-1985, all the songs I selected have a special place in my heart, nostalgic melodies that are still as catchy now as they were back then. It sounds weird but, when I was searching out potentials to cover, whether I was at Walmart, Shoppers Drug Mart or even at the Olympics in Russia, I kept hearing these certain songs over and over and I knew they were the ones I was meant to do! If the songs are still being played on the radio to this day, that certainly speaks to how great they are, I'm just making them heavier! To stay consistent with the nostalgic, the album is not only being released digitally and on CD, but we've also run a limited edition cassette, which is numbered and autographed (including a download card of course). We're really excited about the album and hope it's the soundtrack of every back-to-school jam this year." says Trevor Ziebarth

With the release of the album out today on September 15th, Moonlight Desires have teamed up BraveWords for the premiere of their second video cover “Valerie” by Steve Winwood.

"Valerie by Steve Winwood has itself been revisited a couple times as an amped up radio mix of the original, and as a more modern dance version, but the original release and video is what we're spoofing here.  All the green screen and camera magic he used, that may be cliche today, was new and exciting in the ‘80s, so we tried to have fun with that idea while still playfully tipping our cap to Mr. Winwood."

To get your CD or cassette copy of Moonlight Desires Just The Hits: 1981-1985, please Bandcamp and for digital download, please visit iTunes, Amazon, Spotify, Google Play and all major digital platforms.

Moonlight Desires will be hosting their hometown CD release show on October 6th in Hamilton, ON at The Casbah, so if you're in the area, put on your 80's mullet and party the night away.