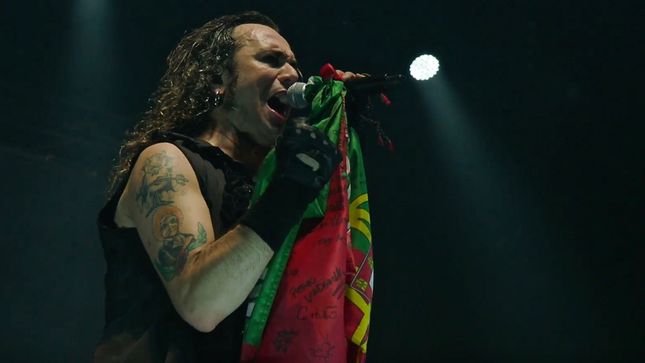 A unique and solemn spell seems to shroud every spot as soon as Portuguese alchemists Moonspell enters the stage - and it was a very special evening indeed when the band played an exceptional show at the Campo Pequeno arena in their hometown Lissabon on February 4th, 2017. That inimitable bond between the gothic metal act and 4,000 of their fans in the sold-out venue is pure electricity, captured for all eternity on the massive Live DVD/Blu-Ray/3CD package Lisboa Under The Spell which will be released on August 17th via Napalm Records. BraveWords is premiering the track "Alma Mater" from the live release.

The band states: “Moonspell’s ‘Alma Mater’ holds for us the true meaning of this Latin expression. It talks about something bigger which unite us, and it’s not God, Politics or football but an eternal sense of belonging and returning. That’s why ‘Alma Mater’ is the biggest Moonspell song. Enjoy it in its home country, our Alma Mater Portugal!!!”

The band on the new live epos: "We are thrilled to announce the release of our brand new Live DVD/Blu-Ray/3CD, Live album, entitled Lisboa Under The Spell! It was recorded live on our breathtaking capitol city of Lisbon and it’s nothing short of an epic trek of more than three action packed hours! We have played Wolfheart, Irreligiosuplus Extinct in full, invited a bunch of guests, summoned our biggest strength to be up to the task, and it feels awesome to unleash a long awaited live release from Moonspell. This edition will be full packed with amazing material, bonus CDs from the shows, a in depth documentary about the band, top sound, dramatic flair and a human picture of thousands of Portuguese witches and wolves under the spell. A great document of what we are on and off stage. Don’t miss out and visit Lisbon through the eyes of Moonspell fans and the genius work of director Victor Castro."

It was definitely about time, since Moonspell aficionados have been thirsting for a new live release ever since Lusitanian Metal (2008). Thus, Lisboa Under The Spell is not simply a visual testimony to the success of Portugal`s biggest metal band - it is a celebration of the unbound creativity and pure magic that is Moonspell.

Watch the Lisboa Under The Spell trailer below.

Lisboa Under The Spell will be available in the following formats:

"All Gone From The Wild" (Intro)
"Breathe (Until We Are No More)"
"Extinct" (Feat. Carolina Torres)
"Medusalem"
"Domina"
"The Last Of Us"
"Malignia"
"Funeral Bloom"
"A Dying Breed"
"The Future Is Dark"