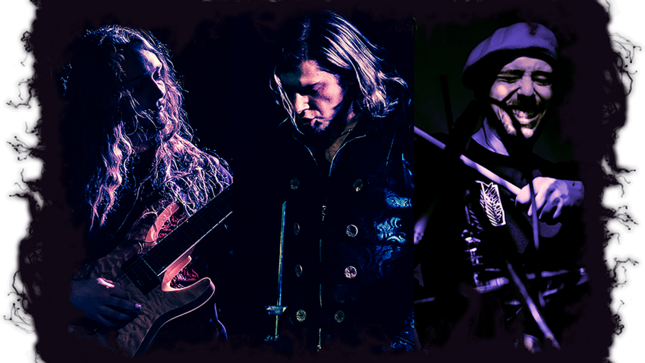 Calgary, Canada’s progressive power gothic metal band Red Cain will be unleashing their new album Kindred: Act II set for digital release on January 22, 2021 with the CD physical release out via Sliptrick Records at a later date this year. The upcoming full length continues and ends the band's storytelling of their Kindred saga.

Vocalist Evgeniy Zayarny adds: "Ride on with us on the second half of the Kindred saga - this mad march toward the Sun. Experimental, aggressive, and recognizably Red Cain in its style, Kindred: ACT II picks up and expands on the events from our previous album, centralizing the story around the Aztec warrior Zalcoatl, ritually chosen to save his people, and trapped inside an alien pyramid to battle a hungry, unearthly Lovecraftian entity that plans to use him to be released into the world beyond its archaic prison."

Today, the band shares their fifth single "Baltic Fleet" in support of the forthcoming album through BraveWords! The track is Red Cain's foray into black metal - a genre that has shaped much of their musical backgrounds.

"We fall, so others can rise again. Every war has its forgotten heroes. Within the album storyline, they come to Mstislav’s aid at a crucial time to keep the gates shut against an overwhelming enemy presence. The most aggressive and heavy track on the album, ‘Baltic Fleet’ was written to be a bastard child of Behemoth and Abigail Williams, with our guitarist Tyler Corbett molding our initial idea into an absolute black metal beast - that also means growls will definitely make their way into future RC songs. The track is also inspired by, and commemorative of the concept of the Unknown Soldier, ‘Baltic Fleet'’ is the battle cry of the honoured dead that gave their lives for peace. Many of our grandfathers fought in the wars of the 20th century and it is our great and humble privilege to be able to acknowledge their bravery in this small way. We salute their sacrifice."

Kindred: Act II follows Red Cain's 2019 album Kindred: Act I also unleashed via Sliptrick Records. Over the past few months of this year, they have shared four singles off the forthcoming full-length “Sunshine (Blood Sun Empire)”, “Demons”, “Kindred” and “Varyag And The Shrike”, which can be heard below. Recommended for fans of Kamelot, Mastodon, and Amaranthe.

With album preorder, Red Cain is giving fans seven custom pieces of digital art designed by the band along with an immediate download of their goth-rock headbanger "Demons".