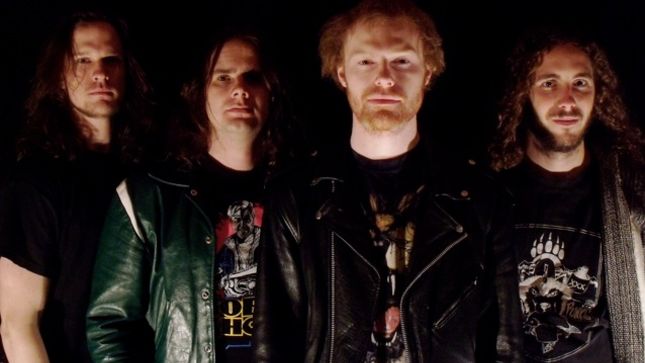 Power thrash champions Sanktuary hail from the harsh and blisteringly cold of the deep far North of Canada’s Yukon Territory situating themselves in the city of Whitehorse (pretty far north, like the Siberia of Canada eh!). They have been trekking across the country for the past 6 years to bring their fierce and dynamic high speed riffs, catchy hooks, and belted out lyrics to the metal crowds.

2016 see the band’s return with their sophomore album Winter’s Doom set for release on January 22nd, 2016. The album features seven killer high speed, breakneck thrash metal tracks inspired by the Yukon’s far north they call home along with other issues such as politics, technology, and more. BraveWords is premiering the new track, “Space Race”:

A collective vision that began in high school with a group of like-minded teens fed up with the constraints of mainstream music who wanted to emulate the lifestyles of their favourite bands. Their straight-forward, no-bullshit attitudes shape their signature brand of heavy metal, which has lead them to release the full length, 2013’s Something Fierce, which reached #19 on the national college radio loud charts, 2011’s Tundrastruck split with Nova Scotia’s Black Moor and Montreal’s Metallian plus two EPs 2010’s Black Magic and 2009’s self-titled.

Members of the band write harmoniously, basing each song off of a key riff from either Alan Binger (vocals and guitar), Glen Emond (guitar), or Cole Hume (bass), and then Anders Grasholm (drums) works his magic on the rhythm of each tune.

“In the title track and album cover we portray ourselves as heavy metal warriors thriving in a habitat where most would perish instantaneously. That’s our homeland, the Yukon,” comments the band.

“2. ‘Wild Is The Wind’: You can make of this one whatever you want but to me it’s about home. It’s our ode to the Yukon.

“4. ‘Winter’s Doom’: Another track loosely based around the Yukon. I guess you can see that we were happy to be home.

“5. ‘Open Your Eyes (To The Lies)’: Don’t feed the propaganda machine. Expose them and they are weak.

“6. ‘Corpse Blockade’: A necromancer summons the dead and forms a wall of corpses as his entourage. Don’t fuck with this necromancer.