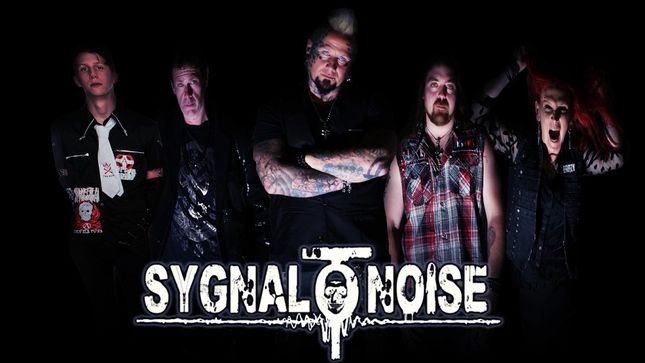 Sygnal To Noise has premiered their latest music Video “Neurotic” off their last CD release Horns High, through BraveWords! The concept of the video is about the day in the life of a person’s battle dealing with Neurotic tendencies and as he comes to find out, the band is causing it!

Sygnal To Noise, a melodic hard rock band, was founded in February of 2013 by frontman, Coopa, a singer/songwriter and veteran of the New England music scene.

Their mission is to help bring rock ‘n’ roll to modern fans and back to its former glory on mainstream radio once again. Sygnal To Noise has been greatly inspired and influenced by bands like Queen, KISS, Alice Cooper and David Bowie, for their showmanship and visuals with a blend of such bands as Stone Temple Pilots, Alice In Chains, Soundgarden, and Pearl Jam for their songwriting and vocal styles.

Having the perfect blend of creativity and diverse talent; Breanne ( Breezy ) Powell on Bass, Christopher Skehan on guitar, Dave Pike on guitar and Austin Cooper on drums; and their combined creative process, passion and vision is what pushes their focus and drive for the future of rock ‘n’ roll.

The band has put together a large interactive visual live performance, with visual art, as well as cameras and stage effects, to help immerse the audience into the music. This combination creates a more fulfilling visual and audio live experience.

“We want to merge some ‘80s antics and flair. With the ‘90s melodies and more honest lyrical content. But also try and stir that pot in such a way it is digestible to a mainstream audience of now.” ~ Coopa

Founder and frontman, Coopa tells us that his personal inspiration came from rock ‘n’ roll greats such as Queen, KISS, Bowie, Prince, Motley Crue, and Marilyn Manson for their visual showmanship as well as many of the great bands of the ‘90s era, for their song writing. Starting with the drums he reports playing in a few local bands, then realized early on he was not going to be the kind of drummer I wanted to be. Then a friend heard him sing for fun one evening he was told he should step out from behind the kit and sing. This was the ‘90s when all the big singers at the time had the more grounded voices with a lot of depth to them. This really appealed to him. With Front men like Scott Weiland, Eddie Vedder, Chris Cornell, Layne Stayley, and Kurt Cobain, he felt a connection to these singers. This inspired him to push forward with better developing his vocals to what you hear today.

Coopa also honed his guitar skills over the years which made him a well-rounded musician and songwriter you hear today. After a few bands and years later, he decided to get back into the music scene again to write with his son Austin on drums. He reports that It was then, and still is today the best feeling in the world to create music with his son! Coopa explains that the goal of Sygnal To Noise has always been to help try and bring back rock-n-roll to the mainstream again. To inspire young people to pick up an instrument and hell maybe dress up a little crazy and express themselves.

“Rock ‘n’ roll is not dead Mr. Gene Simmons. It is just resting. The bands from the past are still out there kickin ass!” All we need is the business to realize that new bands are out there as well. Very willing to push Rock n Roll forward. We just need to be heard. So here we are trying to be heard. Hope you all like what you hear.” ~ Mark Cooper (AKA Coopa) Lead Vocals & Guitar