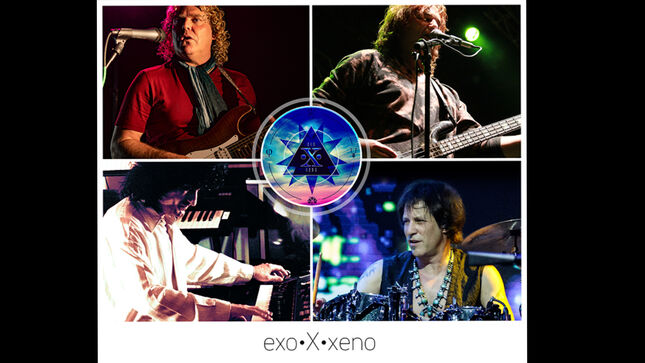 On July 15, 2021, progressive rock project exo-X-xeno launches its anticipated second single filled with fluid proggy riffs and elevated harmonic vocals that break through the stratosphere, called “Reaching For Beyond”.

This epic song release, along with a companion conceptual promo video, continues the band’s musical journey with a polychromatic tapestry of celestial rock sounds.

“Being part of the collaborative exo-X-xeno project, along with Craig Maher, Billy Sherwood, and Jay Schellen, is an ongoing musically uplifting and inspiring experience for me,” says Moraz.

The exo-X-xeno band, which launched at the beginning of 2021, pushes the prog rock boundaries of space and time with expansive, melodious vocals and sonic instrumental layering - all accomplished with a star-studded roster of musical greats.

About Craig Maher, Founder of exo-X-xeno:

Craig Maher’s musical journey as a composer, guitarist, vocalist, and recording and visual artist is sprinkled with celestial eclecticism. Throughout his 30 years of playing, studying and composing guitar-based music, he released two records, Through the Garden of Temptation, and Propel (2009). He composed the music score for the film Brooklyn Lobster, with Danny Aiello and Jane Curtin (2005). Maher has performed in a plethora of venues spanning from the U.S. to Europe and is looking forward to touring with exo-X-xeno in the near future.

“Craig’s exceptional talent for composing, authoring, guitar playing and singing are at the highest level of an amazing creativity,” says Moraz.

Stay tuned for the upcoming release of another exo-X-xeno single entitled, “Vitruvian Man”, featuring the Maher/Schellan/Moraz lineup, to be accompanied by another video launch. The single “Reaching For Beyond” will be available for digital download on the official exo-X-xeno website and on Bandcamp on July 15, with limited CD printed versions released on Shine-ON Records.