EXTREME Frontman GARY CHERONE Remembers EDDIE VAN HALEN - "He Was One With The Guitar, And It Was Pure Joy For Him; I'm Blessed To Have Been There" 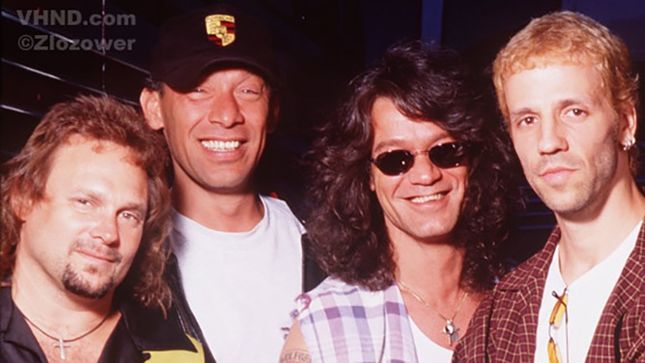 Extreme vocalist Gary Cherone fronted Van Halen from 1996 and 1999, recording only one album with the band, Van Halen III. Rolling Stone caught up with Cherone in the wake of Eddie Van Halen's passing on October 6th due to throat cancer. Following is an excerpt from the interview, with Cherone discussing how he became a member of Van Halen and what it was like working with Eddie.

Q: Did Eddie ever articulate why he felt you and he clicked?

Cherone: "When I did the audition, I had just gotten off the plane and I hadn’t eaten. I was like, 'Fuck, man. I just want to have a good showing.' Not in a million years did I think I would be in the band. I had a good audition. I sang the Dave stuff, and I was a little worried about the Sammy stuff, because his range was higher than mine. I wonder if it was the nerves, but I remember pulling Michael Anthony over and saying, 'Man, you’ve got to help me with this song.' But I had a good audition. We broke for lunch, he was working on a song, and I started writing with him immediately. I think it was 'Without You', which was the first song on VHIII. I sang on a SM57 (microphone) with Eddie smoking in my face (laughs) and little did I know some of those tracks would be on the record. We just clicked as writers. It was a process over a week or two where we just hit it off as collaborators. And as people, I think we were both maybe socially awkward. When we were alone writing, we could be fine."

Q: Did he ask you for input on his guitar playing?

Cherone: "When we were working on 'A Year To The Day', he was doing his solos, and he was working on his third or fourth solo. He was playing them all back. And he was like, 'Which one do you like?' And Mike Post and I were at a loss. 'I don’t know, the first one you played was great and nothing I’d never heard in my life before.' And then he played the second one, and I said, 'Eddie, you can’t ask that. This is above our paygrade.' But he was that way. He would ask, 'What do you think? Do you like it?' And if we did say the second one, he’d go, 'OK,' and he would trust you. But nobody wanted that responsibility. I didn’t want that, not that you could go wrong."

Q: How was it touring with Eddie?

Cherone: "He was great, and the band was great. If I were to do it all over again, I wish we toured with them before we did the record. Doing the record was a learning experience, but you bond when you’re on a bus or a plane and you’re seeing each other every day. That’s when the band really bonded. Eddie was happy. He and Alex had a dressing room; I had one with Michael. Eddie would always run in and bring his guitar and warm up. The shows were great.

I thought the tour was great because it was a combination of the Dave and Sammy era that they had never done. I thought that was special. I remember being in rehearsal and them asking me what I wanted to do, and at the time they were doing just a handful of old tunes with Sammy. Trust me when I say, I didn’t care if we did any of the new record. One or two songs is fine by me — 'Without You' or something. So when Alex asked me, I said, 'I’ll do anything.' 'Well, pick.' So I went into the catalogue and I wanted to do stuff that they hadn’t played. The fans have heard 'Jump' and 'Panama' forever, so to pull out 'Romeo’s Delight', 'I’m The One', 'Mean Street', 'Unchained', for the first time in a decade, this was gonna be fun. And they loved it. We opened up with 'Unchained' and you could see it on the crowd’s faces, they loved it. It didn’t matter who was singing. The fans were blown away by those guys."

Q: What was it like watching Eddie play his extended solo every night?

Cherone: "He’d go through some of his old stuff, but it would expand. It was almost like watching a jazz musician, his head and his fingers. That was the brilliance of Eddie. He would always surprise you. I’ve got an image in my head: when you see the 'Jump' video and you see that smile, that was Eddie. He was one with the guitar, and it was pure joy for him. It just came out of him. I feel blessed to have been there."