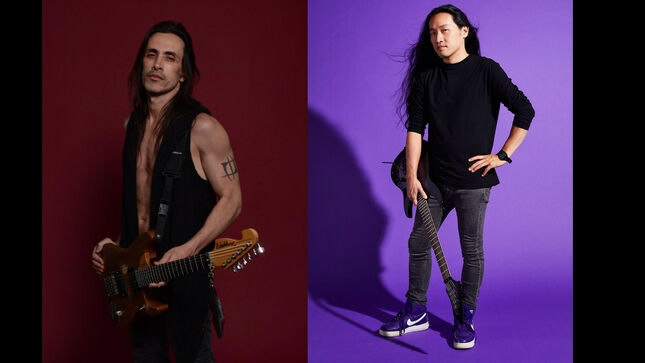 Nuno Bettencourt, guitarist of Extreme and touring guitarist for Rihanna, will be a guest on Herman Li’s twitch channel on December 10 at 1 PM, Pacific Time. Tune in here.

Join legendary guitarist Nuno Bettencourt and DragonForce’s Herman Li as they talk music, guitars, touring with Rihanna and Steve Vai, and the new Extreme album. Nuno and Herman will also take viewer questions and jam together on guitar. As always with Herman Li’s livestreams, all tips and donations for this stream will go to Jason Becker to provide for his medical expenses.

Herman says, “Nuno has always been one of my favorite guitar players. His style is totally unique, blending metal, rock and funk into something completely original. Ever since I was young I have been searching for a 90s signature Nuno Washburn, and I finally found one last year. Even his guitar is like no one elses! Nuno is also an incredibly smart and genuine person, and I think the viewers are going to enjoy seeing us hang out and jam.”

Nuno Bettencourt is the lead guitarist of Extreme and a solo artist. As a guitarist and producer, he has worked with Janet Jackson, Dweezil Zappa and Rihanna. Recently, Bettencourt toured with Steve Vai, Zakk Wylde, Ywinge Malmsteen, and Tosin Abasi as a part of the Generation Axe tour. Bettencourt is also the founder and CEO of Atlantis Entertainment.