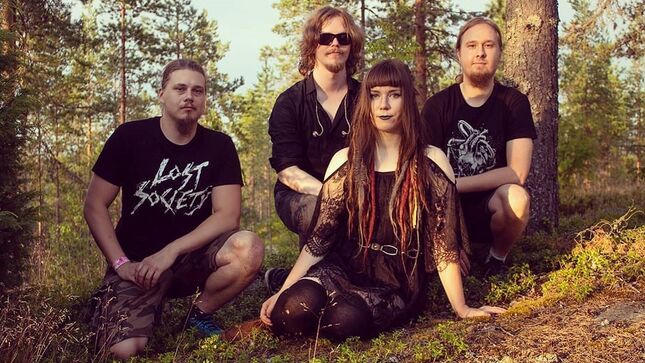 Symphonic metal band Her Alone have released their second single “The Last Rays Of The Sun”. The band builds their sound on ear-catching melodies with heavy guitars accompanied by colourful orchestrations and powerful singing. Her Alone was formed in 2017 by their lead songwriter and guitarist Iiro Inkilä, and lead singer Annika Eronen. Other band members are Jesse Parviainen (Bass) and Jyri Mäkinen (Drums).

“‘The Last Rays Of The Sun’ is a natural continuation to our ‘Into The Night’ ballad, and serves as an introduction to our heavier songwriting without forgetting our key strength, which is in melodies. Lyrical themes and inspiration remain in nature and empathy, so you could say these songs are like siblings. Sound-wise the keyboards have a less dominant role this time around, as I started composing mainly on the guitar, and if you have a sharp ear, you could hear my personal little hats off to Tuomas Holopainen in the main riff”, songwriter Iiro Inkilä explains.

“The Last Rays Of The Sun” was recorded at Finnvox Studios Helsinki, Finland in July 2021 and was engineered by guitarist Iiro Inkilä and the bands live sound engineer Matti Rundelin. The single is mixed and mastered by Mikko Karmila and Mika Jussila. As of today The Last Rays of the Sun is available on all major streaming platforms, and the single also includes an orchestral version of the song.