FIREWIND Guitarist GUS G. Pays Tribute To ALEXI LAIHO In New Video - "He Was A Very Important Figure In The Metal World" 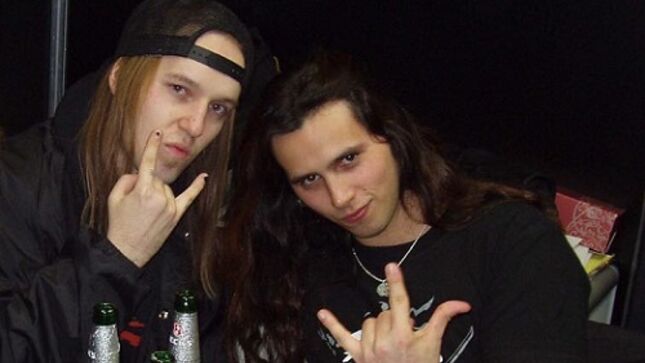 Firewind guitarist Gus G., who's also played with Ozzy Osbourne, has offered tribute to Children Of Bodom frontman Alexi Laiho, who recently passed away, after suffering from long-term health issues, at the young age of 41.

During an eight-minute video uploaded by Gus G. which can be seen below, the Greek guitarist lamented: "It was a shock for me to read the news (of Alexi's passing). I knew Alexi. I wouldn't say that we were close friends or anything, but we were definitely acquaintances through the years. We did a photo shoot together. We hung out a bunch of times at the NAMM shows or the Frankfurt (Musik)messe."

"It's really sad that he passed," Gus continued. "He was a very important figure in the metal world — a very influential guitar player of his generation. So I think he will be missed by many people, by many fans. I mean, he has left us a great musical legacy, and that will, of course, live on."

"It was very sad for me to hear about Alexi's passing, not only because he will be missed by, of course, his loved ones and his family, and he was so young. The guy was so young — I mean, he was only one year older than me, so we were the same generation. So it's a little bit of a shock when you hear somebody your age leaving this world."

"I think he had a lot more to give still — musically, he had a lot more stuff he could have given us," Gus added. "And I just kind of felt like at some point, our paths crossed there for a moment. At that time, (when I initially met him) 15 or 17 years ago, I felt we were kind of part of this European new movement of metal guitar players, so I kind of connected with him on that level."

"Anyways, he was a great guy. He always treated me nice. He was always very cool. So, rest in peace, Alexi. And my condolences to his family, to his friends, to his loved ones. I'm grateful for the times that we got to hang out, and thank you for the music that you've given to the world."