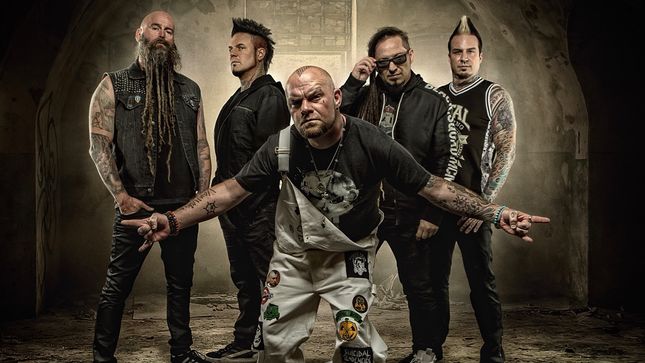 While crisscrossing the country on the biggest North American outdoor amphitheater rock tour of 2018, Five Finger Death Punch’s latest single “Sham Pain” has officially hit #1 at Rock Radio this week. This marks the 6th #1 radio hit for the band. After a three-year wait, the multi-platinum group exploded onto the album charts this summer with their seventh studio album And Justice For None (via Prospect Park), which is now the #4 best-selling hard music album of 2018. At 14 weeks, And Justice For None has surpassed all 2018 hard music albums that preceded it in terms of commercial volume--on-demand and programmed streams, digital song sales and album sales. In the U.S. alone, Five Finger Death Punch have sold over 4.3 million albums, over 9.7 million digital songs and generated just under 2 billion streams.

Five Finger Death Punch's And Justice For None (released via Prospect Park), has generated 170 million U.S. on-demand streams and over 300,000 U.S. digital song sales. Fueled new single and video for “Sham Pain,” currently a #1 hit at Active Rock and the Top 5 rock song “Gone Away,” And Justice For None marked the group’s fifth consecutive Top 5 album release. The album also had four #1 placements on other charts including: Top Digital Albums, Top Rock Albums, Top Hard Music Albums and And Justice For None is the #1 streaming Hard Rock/Heavy Metal Album of 2018.

Due to high fan-demand, Five Finger Death Punch and Breaking Benjamin announced an expansion of their current co-headlining North American Outdoor Amphitheater tour with additional dates which will take both bands through fall 2018. The tour is co-produced by Live Nation and Frank Productions (see dates below) and features special guests Nothing More and Bad Wolves on the current summer leg. On the fall leg, global 2018 breakout rock band Bad Wolves will once again join the trek on select dates and Swedish heavyweights In Flames on other select shows. Chart toppers From Ashes To New will be support on all fall dates. The artists on the tour are also dominating the rock charts with their most current singles with Five Finger Death Punch at #1, Breaking Benjamin at #4, Bad Wolves at #11 this week and From Ashes To New coming off a #2 hit.

Fans purchasing a ticket to the tour are also supporting two charities that are close to the band’s hearts as they are donating a portion of every ticket sold to two charity organizations. Five Finger Death Punch has chosen to donate $0.50 from each ticket sold to C.O.P.S - Concerns Of Police Survivors, an organization whose mission is rebuilding shattered lives of survivors and co-workers affected by line of duty deaths, through partnerships with law enforcement and the community. While Breaking Benjamin has chosen to donate $0.50 from each ticket to Prevent Child Abuse America which helps counteract the abuse and neglect of our nation’s children by promoting services that improve child well-being and developing programs that help to prevent all types of abuse and neglect.