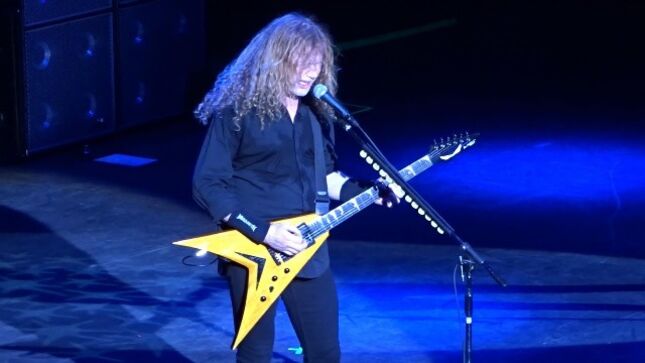 Music Radar has posted a new 5 Songs Guitarists Need To Hear By… feature, showcasing Megadeth this time out. An excerpt from the rundown is available below.

Music Radar: "Let’s take it back a few years to Dave Mustaine’s partnership with Chris Poland and an album that many Megadeth fans would consider a close second to Rust In Peace. Opening with 'Wake Up Dead', a spiritual antecedent of Rust In Peace’s 'Lucretia', Peace Sells is a consistently spectacular record that sees Mustaine et al take more stylistic risks than most of their peers ever dared to. Take the title track, with its propulsive pseudo-disco beat and Ellefson’s bassline establishing a solid groove for some primal boogie from a cynical Mustaine.

"Good Mourning/Black Friday" was another swing for the fences. If Mustaine as guilty of chasing hits in the post-Youthanasia era here he seemed to be actively resisting any constraints on his songwriting. This is Mustaine’s imagination running wild, with the extended "Good Mourning" intro section written in the emotional dream cadence of A Nightmare On Elm Street movie. There’s something soft-focus about Mustaine’s arrangements here, the acoustic, the all-but-liquid melodic lead guitar from Poland, the reverb and the chorus. Hey, it was 1986.

Just listen to how Mustaine builds the tension towards the second half of the song before Gar Samuelson’s drum tag drags us into the pit, where a really mean riff awaits."

"Symphony Of Destruction" - Countdown To Extinction (1992)

Music Radar: "There are many ways to look at 'Symphony Of Destruction'. In some respects, it is Megadeth’s 'Ace Of Spades'; you can’t discuss their discography without mentioning it, and for some that makes it over-played. And yet while it might lack the surprise of a deep cut rediscovered – 'The Skull Beneath The Skin', 'Hook In Mouth', 'My Last Words' – it has a crystalline purity of purpose and execution.

After the hyper-technical rigours of Rust In Peace, this minimalism found Megadeth in the pocket of a simpler, more sinister groove. Ellefson, again, earns his corn, even if he’s just keeping the eighth notes coming. Given its spare arrangement, 'Symphony Of Destruction' makes for an excellent entry point for those pulling apart Friedman’s lead style, shifting the modes of his solo to work with the chord he is playing over, and doing so with the most elastic and effortless of touches."