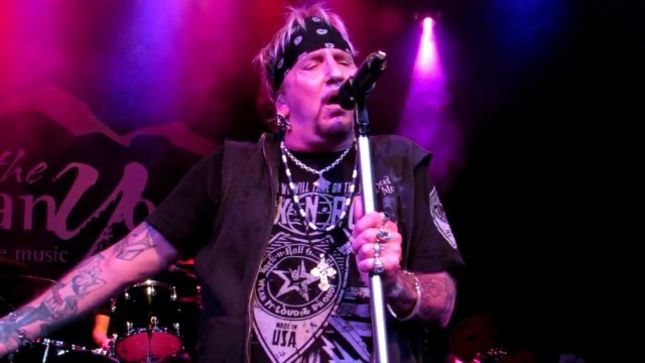 As of Monday, July 9th I was informed through an email and the internet that I was no longer with the band Great White," says vocalist Terry Ilous. "After having just played a round of back to back shows this week, needless to say, I was taken by surprise. I would, first of all, like to personally thank each and every one of the fans for their continued support over the last 8 1/2 years. It has meant a great deal to me to meet and get to know so many amazing people while on the road."

"Taking over the lead for such an iconic band as Great White was no easy task. I did my best to never disappoint the fans and to respect and protect the legacy that Mark, Michael, Audie, and Jack had established so many years ago. Throughout these 8 1/2 years, I have proudly invested all of my energy and focus into the GW brand. And while I am disheartened at the abrupt end to this year's tour; I will now put my focus into my solo works and other endeavors. While I have no official statement on future touring at this time, I will say that there will be some surprises in store for fans. Stay tuned to all my social media pages, announcements to come."

Terry later provided the following update: "Hello everyone thanks for the support, I'm very touched and yes, I'm disheartened but do not wish to start anything bad between the GW camp and myself. It was a great opportunity and I thank Mark, Audie, Michael, and Scotty for believing in me. Great White [Band] Trust me I'm not a doormat, I just don't want drama."

This weekend (on July 21st), original Great White vocalist Jack Russell commented on Ilous' firing, which he called "deceitful". His full statement can be read below.

"Hello my friends, I just wanted to express my condolences to Terry Ilous for the deceitful way my X band members dealt with the situation of his termination; kind of reminds me of something else, huh? In the last few months Terry and I have gotten to know each other through LinkedIn, have become what I would say friends. As far as I'm concerned, he's a great guy and he had an opportunity and he took it. The fact is it was my fault that it all happened to begin with. I was unreliable, unhealthy and my addiction ruled my world. I wouldn't have wanted to play with me either if I were them. The only thing I was very upset about was the way they went about it. But at least Terry got an e-mail where I received nothing, not even a phone call or a return message. But this is not about me, this is about Terry. I'm sure he will find his way to a better place as he is a great singer and has a lot of talent and I have a lot of respect for him. I wish him well and I hope you will all support him in his future efforts. God bless you all, and as always keep the rock alive! It's up to you. All my love."