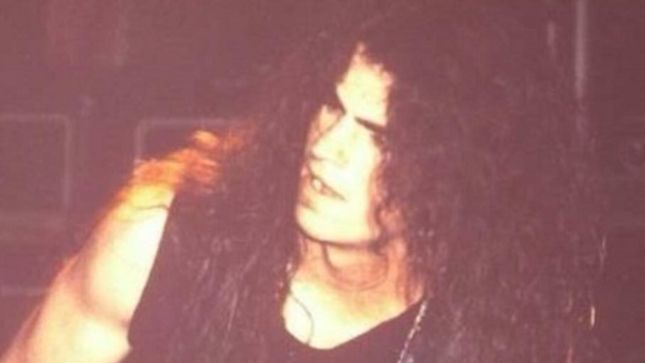 Guitarist Tim Calvert, who played on three Forbidden albums: Twisted Into Form (1990), Distortion (1994), and Green (1997) — as well as one Nevermore album, Dreaming Neon Black (1999) passed away earlier today, April 30th, at the age of 52 after a battle with ALS (amyotrophic lateral sclerosis​).

Tim's death was first announced on Facebook via his sister Vicky Calvert-Hawkins, who wrote:

"Heaven has gained another angel, my big bro, Tim Calvert. Tim passed away peacefully, Monday morning, after a long battle with ALS (Tim chose to keep his illness private). Myself, and my husband Bret, (along with several wonderful doctors, and hospice providers) are so honored to have been able to be Tim’s care giver, in our home, for the last 5 months. We are so incredibly thankful to have had this time to spend with Tim. November 7, 1965 - April 30, 2018. Note the dash “-“ in the dates. Life is all about how you live your dash “-“..... And you, my dearest Timothy, did one hell of a bad ass, bang up job, living your dash to its fullest. Well done! Incredible musician, airline Captain, world traveler, lover of nature and animals, faithful Oakland Raiders & Oakland A’s fan, comedian, and supreme master guru of WW II military/aviation history and memorabilia. I love you, big bro. Cheers, until I see you again."

Forbidden guitarist Craig Locicero also took to Facebook, posting: "Beyond sorrow. We just found out Tim Calvert has passed. Some have known he was battling an aggressive form of ALS for a while now. It was all very private as per his wishes.

The greatest songwriter, musician and guitarist I have ever had the pleasure or creating music with has left the building. Tim's genius will live on forever in the three Forbidden records he helped create with us."

Forbidden bassist Matt Camacho added: "The great Tim Calvert passed away quietly this morning with his family present. It's so like Tim to request we keep it quiet because he was such a humble soul. I believe he just didn't want anyone to make a fuss over him.

Everyone who knows Tim is a better person for it. He was the kinda guy who had no enemies and was extremely talented at everything he does. Always really funny, the kind of guy who always had the witty comeback and could talk shit with the best of them, which when living on a tour bus was essential to be able to put bandmembers in their place.

When he joined Forbidden, I barely knew how to play, and Bostaph and Locicero didn’t have a lot of patience to show me the songs. I would spend many hours as Tim walked me through all of the painstaking details and putting in his own time making sure I wouldn't get booted from the band.

Not a lot of people know this about Tim, but after he stepped away from Nevermore, who was even a bigger band than Forbidden, he went on to become a pilot and became a captain at United. What a badass motherfucker... Dude left a legacy of incredible guitar playing and became an expert in a field people spend their whole life trying to achieve.

What a fine job you did, Tim Calvert… Life well lived!

The good ones die way fucking too young... This one is gonna be tough to get through."

Previous Nevermore, and current Arch Enemy guitarist shared via Instagram: "Truly a sad day today to learn about the passing of my dear friend and fellow bandmate Tim Calvert. Not just an incredible guitarist and songwriter, but one who followed his love and passion of aviation to become an airline captain. To this day, I'm blown away by all of his accomplishments. ALS is a horrible disease and took my friend away far too soon. May you rest in peace, Tim."

Truly a sad day today to learn about the passing of my dear friend and fellow bandmate Tim Calvert. Not just an incredible guitarist and songwriter, but one who followed his love and passion for aviation to become an airline captain. To this day I’m blown away by all of his accomplishments. ALS is a horrible disease and took my friend away far too soon. May you Rest In Peace Tim.