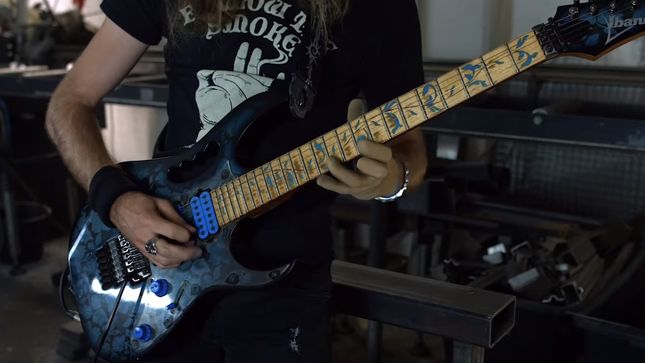 Guitarist Christian Muenzner (Eternity’s End, Alkaloid, ex-Obscura, ex-Necrophagist) has released a play-through video for "Knight Rider", a track from his third all instrumental solo album, Path Of The Hero.

The influences on the album range from neoclassical and heavy fusion to power and progressive metal. The song "Discovery" was co-written by Hannes Grossmann and contains a section that was originally intended for an Obscura song when Muenzner and Grossmann were still in the band. "Nocturne" is an arrangement based on Franz Liszt’s "Liebestraum No. 3". With nine tracks and a total playing time of only 35 minutes, this is the shortest of Muenzner’s three solo albums so far, purposely done to keep in the tradition of the late ‘80s Shrapnel Records albums. The album was co-produced and mixed and mastered by Hannes Grossmann.

In the video Christian is wearing a special glove, and as he explains, "Since 10 years I suffer from a neurological disorder called focal dystonia, which causes involuntary muscle contractions in my fretting hand. I am wearing this musician's practice glove as it helps a bit to reduce the symptoms of my left hand dystonia; because of the texture of the material the brain gets slightly different sensory information from the fingers, and the dystonic impulse is not triggered as heavily as without the glove. I only use it when I play really difficult stuff. It's a good tool, although the effect wears off over time."

Muenzner is a much in-demand guitar player for live shows, and starting January 30 he will be performing as second guitarist with Serious Black on their European tour with Hammerfall and Battle Beast. In addition, Christian has been recruited by vocalist Wade Black (ex-Crimson Glory/ex-Leatherwolf) to join his new band, the Wade Black Project. This summer the band will tour Europe and play all of the greatest songs from Wade's past, including Crimson Glory, Leatherwolf, and Seven Witches classics.

The album will be released in Japan and South Korea through King Records on March 11 and the rest of the world on March 20 through Muenzner’s own label, Shredquarter Records.