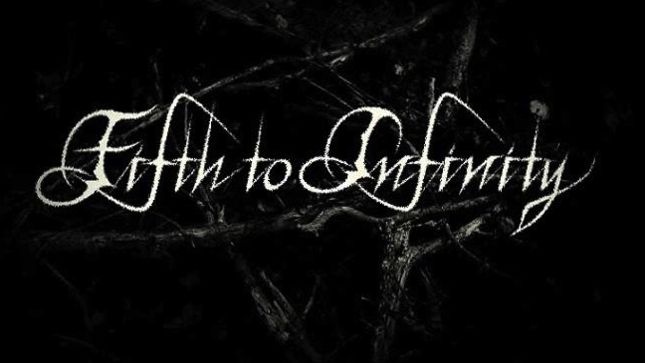 Fifth To Infinity are now the missing links at Graviton Music Services. This dark Swedish force is about to release their masterpiece, created in absolute devotion of Nader Jonas Reslan (previously Vinterkrig) - vocals and guitars, Martin Lopez (that we all know from Opeth and Amon Amarth, previously Vinterkrig and now also Soen) - drums and David Lindh (previously Yvonne) - bass. The band speaks loudly: "We are the antagonists of this so-called "human civilization" and of the monkeys that consecrate its existence. Seeing far beyond the consensus of an objective reality. We depict the multitudes and the non-existant."

Fifth To Infinity signed an exclusive management deal with Graviton Music Services and are now presented by Aleksandra Grofelnik at aleksandra.grofelnik@graviton-musicservices.com.

Nader talking about this match: "We are ablaze with pride to announce that Fifith to Infinity recently merged fires with the  great flames of Aleksandra Grofelnik as our Manager, Mohor Mlakar and the Slovenian forces at Graviton Music Services - The Missing Link.

As most of you already might know, we've had a pretty fucking rough ride with lots of delays to say the least. Pushing 'Force Majeures' on repeat and privately, we've all been both south of heaven and hell. Finding the right partner for 'meta therions' like ourselves hasn't been a walk in the park exactly through these years. By the end of last year (2013), everything finally started looking up for us. Great things started to manifest into reality and we have had the honor of speaking with many great and worthy 'contenders' to entering partnership with. But when we started to consider the many uncertainties regarding the current state of the 'music bussiness' and saw that Graviton is shaping new ways of co-operation that are music service-based, rather than signing up for the 'whole package'. And after meeting up face to face it quickly came clear that they are the ones that Fifth To Infinity will be sharing our course and causes with. The hemp has been signed. Our inevitable glory burns ever brighter! We are legion, we are entity."

Lopez adds: "I'm very excited to finally release our debut album after all the years of contradictions and hard work. I'm even more excited that this is happening with Graviton who we consider both partners and friends. Our vision and art will remain intact without needing to compromise to any big label on their pursuit for greed and capital. This is very important for us and we're sure we're doing the right thing with the right people. I hope that people, who see music as something more than just entertainment, will take the time to listen to our album."

"This is exactly how metal should sound like - dark, twisted, deep ... A spiritual journey! Their music has many layers, revealing more and more every time one listens", said Aleksandra Grofelnik, describing Fifth To Infinity's upcoming album and adding: "But Fifth To Infinity are so much more - they are this strong force, creating a movement of pure energy, not compromising, not bowing. I can identify with the whole ideology of Fifth To Infinity and I really can not express how proud, honored and excited I am to be able to be a part of this force. Can't wait to send the album out to this world, that needs more of telling the truth, so you all can be blown away by this masterpiece and join the movement."

David Lindh speaks about Fifth To Infinity and adds: "In Fifth To Infinity there is no holding back. The engagement and support of Graviton, a record label with an unconventional take on the music industry, allows me and my fellow band members to fully express ourselves artistically without compromise."

Fifth To Infinity was formed by Nader Jonas Reslan, Martin Lopez and Martin Mendez in 1997 after the disbanding of the underground black metal band Vinterkrig. The band was to release their debute album in 2000 but, due to a set of unfortunate circumstances, it was all put to rest in 2001 before the completion of the recording.

Nader revived the band in 2007, now with an even darker vision. Reuniting with drummer Martin Lopez in 2008 and recruiting bassist David Lindh as a fulltime member in 2013, Fifth To Infinity is currently completing their masterpiece, set to be released later this year.

Fifth To Infinity are: