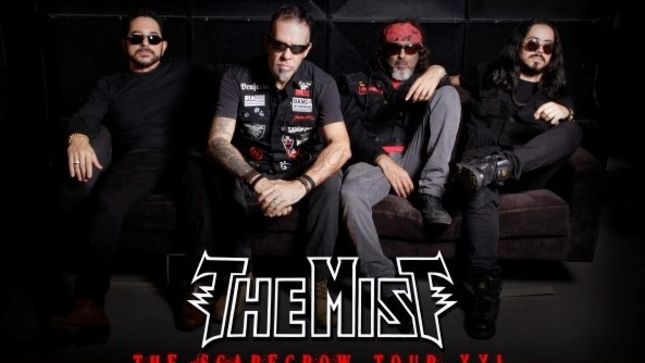 The Mist, the Brazilian metal band featuring former Sepultura guitarist Jairo Guedz, will celebrate its 30th anniversary on a new tour. The group's lineup will consist of most of the members that recorded "The Hangman Tree" album, considered a classic in Brazilian thrash metal. Joining Jairo will be Vladimir Korg on vocals, Chris Salles on drums and Wesley Ribeiro (Hells Punch, Hammurabi, Drowned) replacing Marcelo "Cello" Dias on bass.

The Mist has been practicing for about a year to prepare for the "Scarecrow Tour XXI".

Said Korg: "We have been rather out of sight this year just to make sure we would have a constructive, positive and artistic energy among us. Once again, we've learned to listen and respect one another.

"We want to deliver the best of our experience together to our fans. We want to inspire and perhaps bring a new perspective to our own lives and to all the people who share their ride with us. We won't let you down. Let's get on the road!!!"

Formed in 1989 in Belo Horizonte, The Mist's setlist for the upcoming tour will cover the band's first phase and the albums Phantasmagoria and The Hangman Tree. The subsequent albums, Ashes To Ashes, Dust To Dust (1993) and Gottverlassen (1995), incorporated more of an industrial influence, and they will be performed on future tours.

Dias, who lives in Los Angeles, was one of the founders of The Mist and was also the first bass player in Max Cavalera's Soulfly.