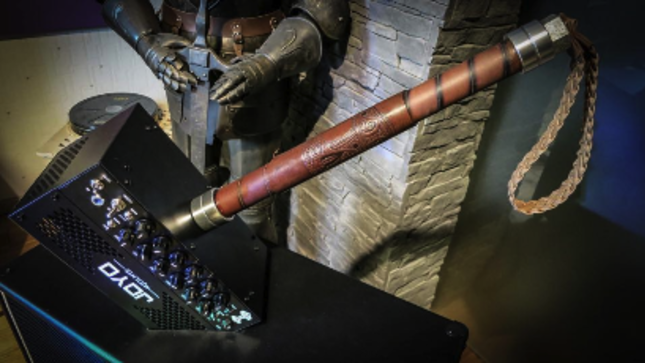 Frameshift mastermind, producer and guitar teacher Henning Pauly attended Musikmesse 2015 in Frankfurt, Germany back in April 2015 where he presented the new Mjolnir amp head from Joyo. He has checked in with the following update:

"It took a while, but I finally got around to producing a track with the Joyo Mjolnir. In this track I am only using the drive channel... that song doesn't need anything else. The song is from the unreleased third Frameshift album, the song is called 'Old Friends, New Enemies'."

Pauly spoke exclusively with BraveWords earlier this year and let us in on his Joyo endeavour:

"Here's the deal... we've developed a lunchbox amp - metal - pretty much similar to the Engl Ironball or Mesa Boogie Mini Rectifier, but obviously cheaper and more flexible in some ways. I know metal guitar players, so I convinced the company (Joyo) to not name this thing Thunder but instead name it Mjolnir because it kinda looks like the head of Thor's hammer. So, I went further. I had them send me two empty ones and actually turned them into hammers for the Musikmesse. We'll have two there, one being wielded by a two meter tall monster named Joachim, who will be dressed as Thor. The other one will be 'hammered' into a 4x12 behind him."