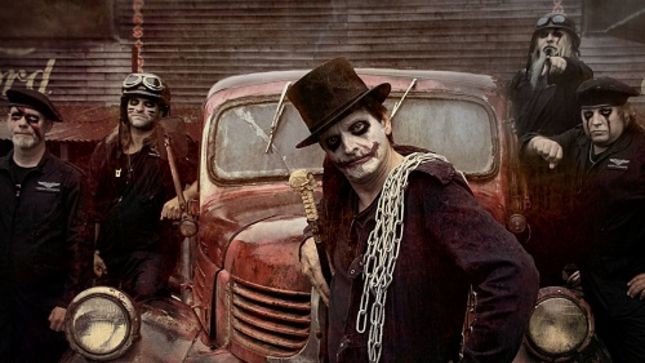 Swedish heavy metallers Freaks And Clowns have unveiled their new video "Justice Elite". The track is the first to be shared from the band's second album, Justice Elite, set for international release on October 16th via Metalville Records.

Classic hard rock meets modern power metal: this is the sound of Freaks And Clowns. The band, founded by Astral Doors drummer Johan Lindstedt and singer Chrille Wahlgren, who is popular in his homeland of Sweden, is completely dedicated to honest, straightforward heavy metal.

It all begin in 2017, when the two met in the studio in their hometown of Borlänge to exchange some song ideas. It soon became clear that the influences of classic heavy metal combined with modern sounds would be the path they wanted to follow together in the future. In addition to guitarist Mathias Henrysson, guitarist Mats Gesar and bassist Ulf Lagerström were two more Astral Doors musicians who joined the band.

After the self-titled debut album, released by Metalville in October 2019, Freaks And Clowns set about putting the still-abundant ideas for new songs into practice. The 11 tracks on the follow-up, Justice Elite, which will be released on October 16th, are once again taking no prisoners and pushing forward at full speed from the very first moment. Cover and tracklisting are as follows: