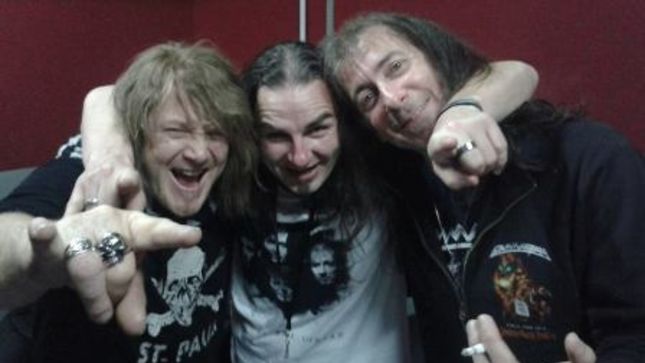 German power metallers Gamma Ray recently recruited Frank Beck as lead singer. Beck and Gamma Ray leader Kai Hansen (ex-Helloween) split all lead vocals on the band's recent Best Of The Best Party Tour, which celebrated the 25th anniversary of the release of Gamma Ray debut album, Heading For Tomorrow. Back also stepped in during the band's European tour in 2014 as a temporary / part time replacement when Hansen lost his voice at the very beginning of the jaunt.

Speaking to Spark TV (check out the interview below), which is part of the Czech monthly magazine Spark, Hansen stated about Gamma Ray's decision to recruit Beck: "I'm gonna step back a bit and enjoy guitar playing a little bit more instead of being stuck to the microphone all the time on stage."

Regarding when Gamma Ray decided to hire Beck as a full-time member, Hansen said: "It was a pretty short time before the start of the tour, actually, that we finally said, 'Okay, we do it.' One of the reasons was that we were not sure if it was a good idea to do it for this tour, because it's (celebration of our) 25 years and people are very much used to my voice and so on. But due to some necessity, because shortly before, we've been in South America and toured Japan, I found myself being completely damaged with the voice from air conditions and all that. So it was a kind of necessity to do something, and it made the decision kind of grow on us quickly. And so we just went, 'Okay, let's go for it now and just take the risk and hope that people accept it.' And so far the acceptance has been brilliant, absolutely great."

Hansen explained that adding a new lead singer to a band that has been around for a quarter of a century is a risky move, but one that will enable Gamma Ray to grow and survive. "The band is very much recognized by me, but on the other hand, there's always space for something new," he said. "And I think we wouldn't have done it if we weren't sure about it."

Asked if Beck will contribute to the songwriting process on future Gamma Ray albums, Hansen said: "Definitely! Sure. Of course. I mean, everybody has his influences, and they all are coming together while doing an album, so definitely Frank will add up to the Gamma Ray sound. I mean, he grew up on the same roots that we did and likes the same kind of music. But still, there's always something that a new member brings in and that makes the music grow."

Check out Beck in action below.