GENE SIMMONS On EDDIE VAN HALEN - "I Was Not Just Amazed By His Talent, But I Admire Him So Much As A Human Being" 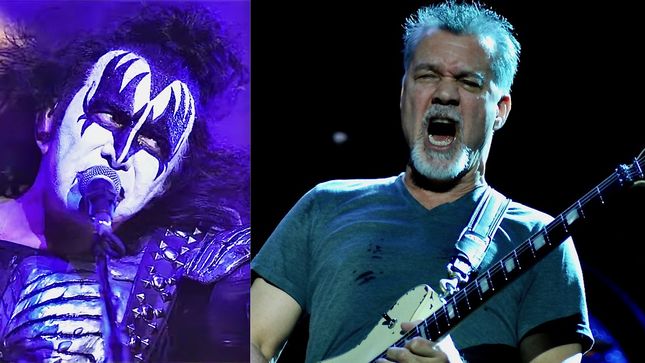 KISS singer/bassist Gene Simmons - who first spotted Eddie Van Halen and the Van Halen band in 1976 during a performance at Starwood Club in Los Angeles - tells People about the time he ran into the Rock And Roll Hall Of Famer, who died of cancer at age 65 on October 6.

The chance happening took place in Beverly Hills circa 2014, and what stood out to Simmons most was that Van Halen managed to smile through his pain.

"Years later, I ran into Eddie on Sunset Blvd. This was after he caught the disease and I didn't know what to say to him," Simmons, 71, admits. "I didn't want to bring up the subject. Should I grab him and hug him and tell him how sorry I am? Should I put my hand on his shoulder?"

But the renowned guitarist knew exactly what to do. "He brought it up. He said, 'Hey man, I got cancer. What are you gonna do?' and he smiled," Simmons recounts.

"He just sort of shrugged. He was like, 'Hey, wanna get a hot dog or something?' And he just walked off - not looking for sympathy or anything," says the star. "He really seemed to enjoy life."

Simmons recalls the moment he learned of Van Halen's death. "When I was shocked to find out Eddie had passed, the first image that hit me - so help me God - was Eddie Van Halen grinning from ear to ear with that big, huge, million-dollar smile."

Gene adds: "He was unabashed and just comfortable in his own skin. I was not just amazed by his talent, but I admire him so much as a human being."