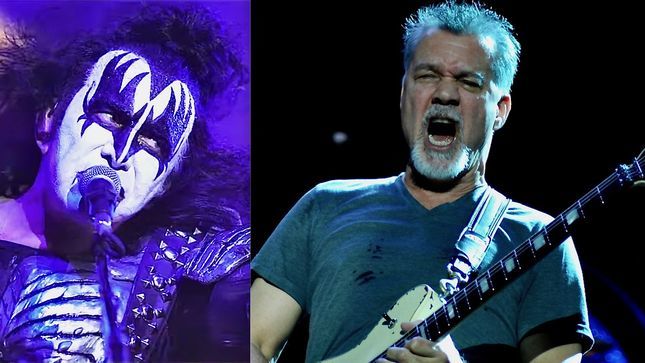 KISS singer/bassist Gene Simmons - who first spotted Eddie Van Halen and the Van Halen band in 1976 during a performance at Starwood Club in Los Angeles - recently guested on The Dennis Miller Option. During the interview, found below, Simons spoke fondly of Eddie, who died of cancer at age 65 on October 6th.

On the time he accepted a ride home from Eddie Van Halen after a Metallica show:

"He puts me into this old jalopy thing with no doors. Ever see M*A*S*H, with those helicopters that don't have doors on them, and they're flying sideways and you think you're gonna die? This thing's got no doors, it's got seatbelts, and Edward's smoking away like a chimney and driving what I thought was 100 miles an hour up the 405. I'm holding on for dear life and trying to pretend that I'm a guy without fear and all that. Scared to death. And I said 'Eddie, Eddie, slow down....' A cigarette was hanging out of his mouth, and he said, 'Why?' I didn't quite know what to answer."

City Public Information Officer, Lisa Derderian, confirmed the item would appear on Monday’s agenda, but said additional information was not yet available.

Pasadena residents Randa Schmalfeld and Julie Kimura have raised $5,200 through the online fundraising platform GoFundMe in hopes of having a street or alley named in honor of the rock star, who they call “Pasadena’s own guitar hero.” The donations have exceeded their $3,000 goal.

“We are delighted that the City Council is moving so quickly to consider a dedicated public space here in Van Halen’s hometown,” said Schmalfeld. “We envision a place where fans can forever honor and celebrate the brilliance of Eddie Van Halen and the phenomenal success of Pasadena’s Hometown Band. The overwhelmingly positive response to our campaign demonstrates the desire of our community to honor Eddie and his bandmates. We are hopeful that the council will decide in our favor and we are looking forward to next steps in forever honoring Pasadena’s favorite Rock Stars!”