GENE SIMMONS Talks Potential KISS Earnings For End Of The Road Tour, Being Accused Of "Boasting" - "Bitch, I Worked For That Money" 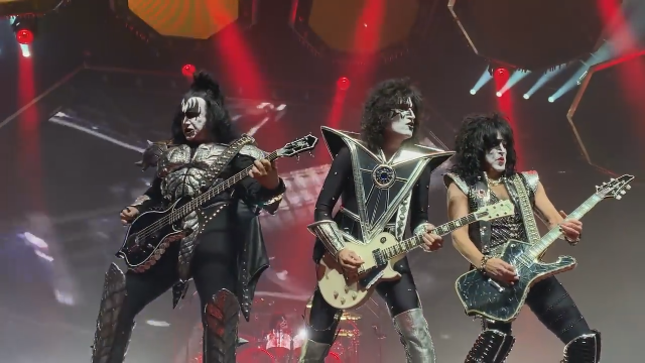 KISS bassist / icon Gene Simmons recently spoke with the Wall Street Journal about the band's End Of The Road tour, specifically about the money he and co-founder Paul Stanley's KISS brand stand to make when all is said and done.

Simmons: "Paul and I are partners, and everybody else works for the organization. Everybody gets paid very well. I don't want to quote figures, but this will be $150 or $200 million gross tour, not counting ancillaries, licensing, merchandise and stuff like that."

Simmons, who will turn 70 in August, went on to say that the reason he is still touring after all this time is "to make more money. And we're making bucket-loads, and I'm happy to say that. The guy that wins the lottery jumps up and down and runs to everybody and says, 'Oh my God. I just made $100 million,' and everybody applauds. But the guy that works for it and makes $100 million, oh, he's just boasting. Bitch, I worked for that money, I deserve the accolades more than the guy that walks in and did nothing to win the lottery. So I tour, and I work hard."

KISS launched the first leg of their massive End Of The Road World Tour on January 31st at Rogers Arena in Vancouver, BC. Speaking with Los Angeles Times, ahead of the band's February 12th show in Anaheim, Gene Simmons talks about the trek.

“This is a good time to do one last victory lap,” says Simmons. “You want to go out on top.”

Gene insists these shows will exceed the band's previous spectacles. “It’s by far the largest and most over-the-top we’ve ever done,” Simmons said.

“There’s nothing subtle about what we do,” he said, adding the show will incorporate gravity-defying antics and “more firepower than most Third World countries.”

Pro-shot footage from the tour launch can be seen below: