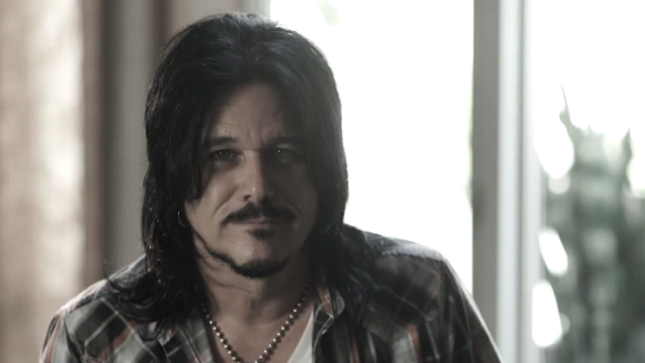 Former Guns N' Roses rhythm guitarist Gilby Clarke is featured in a new video interview with 80's Metal Recycle Bin. During the clip, which can be seen below, Clarke talks about making it in Hollywood, his pre-GN'R bands Candy and Kill For Thrills, as well as Guns N' Roses in the '90s.

An excerpt, dealing with the rise of grunge, has been transcribed as follows: "There was a lot of talk of the climate changing — a lot of it," recalls Gilby. "'Cause, obviously, Axl (Rose) was always on top of that stuff. He loved Nirvana; he loved Soundgarden; he loved Pearl Jam. He liked a lot of those bands a lot more than, I would say, myself, Slash and Duff (McKagan); we were a little slower to the change."

"I think when we really noticed the big change is when we got off the road. I had made a solo record (Pawn Shop Guitars); Slash had made a solo record (It's Five O'Clock Somewhere). We were playing stadiums one year, and next year we were playing clubs. Theaters sometimes and stuff — but two or three years earlier, and Slash's solo band would have been playing in an arena. So we could definitely tell the climate had changed at that point."

"I remember one thing that stuck with Slash and I when we were coming out of the Rainbow (in West Hollywood, California) one time. And this was around probably '92 / '93. And somebody saw Slash and goes, 'Oh, my God. Look, it's Slash.' But they were laughing, like he was a cartoon character, not Slash from Guns N' Roses, which, three or four years before that, was the coolest motherfucker on the planet."

"So that was a couple of things that we could kind of tell that things were changing a little bit. Some bands were starting to be a little cartoonish rather than having the musical credibility."

"Tightwad" is the new single from Gilby Clarke, and the follow up to his recent singles "The Gospel Truth" and "Rock N’ Roll Is Getting Louder". It was written around a guitar riff he came up with while trying out a new fuzz pedal. Lyrically, it was inspired by deceit, treachery and the creative extremes people will go through to get ahead. "Tightwad" features Mötley Crüe’s Nikki Sixx on bass, and Stephen Perkins from Jane's Addiction on drums.

"This song was written around a guitar riff I discovered while trying out a new fuzz pedal. Lyrically, I was inspired by deceit, treachery and the creative extremes people will go through to get ahead. I tried to get my message through with humor, but if it hits too close to home, maybe we all should take a closer look at ourselves and make improvements," says Gilby.

"I was lucky to have some wonderful musician friends contribute to the recording of this track, Nikki Sixx and Stephen Perkins. Stephen, as always, came through with a beat that drives the song and Nikki found a cool bass groove that accentuates the feel I was looking for. I tried to get my message through with humor, but sometimes the truth hurts," admits Clarke.

Be sure to add "Tightwad" to your digital library by visiting this location. Listen to the song in its entirety now:

His previous single "Rock N’ Roll Is Getting Louder" is a true stormer of a track in pure Gilby fashion - rock n’ roll doused in the influences that run through Gilby’s veins.

Secure your copy of "The Gospel Truth" here. Check out the video for "Rock N' Roll Is Getting Louder" below: