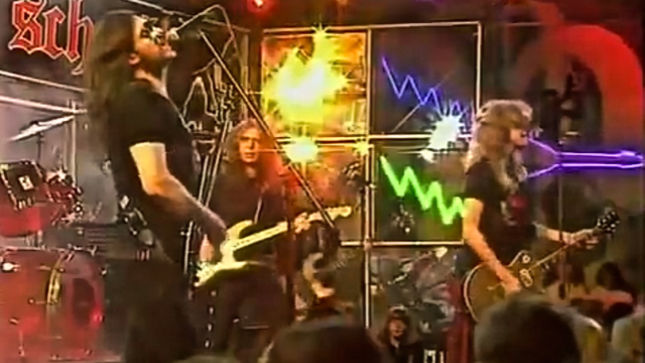 Paying tribute to late Motörhead vocalist / bassist Ian ‘Lemmy’ Kilmister, who passed away at age 70 yesterday (December 28th) from an extremely aggressive cancer, the members of Girlschool have released the following statement:

“Today it is a very sad day in rock, we lost a true friend, someone who since 1979 was part of our lives and our history as band.

“We played together, recorded and toured together but most and foremost we had the opportunity to know Lemmy's true and kind heart!

“RIP Lem, we have no words to express how much we miss you!”

The 1981 “Please Don’t Touch” cover was a collaboration between Girlschool and Motörhead, and the most successful for both bands at the time.

Lemmy's peers, pals and friends have taken to social media, offering their condolences; a sampling follows:

Scott Ian of Anthrax – “He lived a life of dreams and he went out on top. He was Motörhead and HE PLAYED ROCK & ROLL!!!”

Charlie Benante of Anthrax – “Lemmy...words can't express how much you meant to Our music and our lives. I'm glad I knew a legend.”

Nikki Sixx of Mötley Crüe - “I’ll miss you buddy and our conversations. You were always a pilar of dignity. RIP.”

Duff McKagan of Guns N’ Roses – “Rest In Peace Lemmy. A hell of a man who suffered no fools. U shall be missed brother, and, THANK u 4 the years of unwavering kick ass R&R.”

Mike Portnoy of The Winery Dogs – “FUCK!!!!!!! RIP LEMMY Sad that so many of us saw this coming, but never thought it would really happen...we all thought you'd live forever.”

Chad Gray of Hellyeah – “And yet again black December takes another one of my hero's. People can argue about where metal started but if this man isn't in the conversation I think your nuts! He did not give a fuck about what anyone thought. He just played HIS MUSIC! As far as I'm concerned All we can do is try to live our lives to the fullest and be as awesome as he was! You will be missed but your music will last forever. R.I.P Lemmy Kilmister. You will always be The one and only Ace of Spades!

Airbourne – “You gave us and the world your absolute hardest, meanest, toughest, pure spirit of Rock'n'Roll. You lived a hundred lives in one, Even in silence you are deafening. We are thinking of all your family and your other family- the Motörhead road crew that have lost their leader and their mate. Rock In Loudness.”

Obituary – “The music world's heart just stopped. There will only be one Lemmy.”

King Diamond – “It is a sad day. We have lost Lemmy, a legend of legends. With the highest respect, Rest in Peace my friend.”

Tom Morello of Rage Against The Machine – “Lemmy was a true rock icon, singular in voice and spirit. Metal flags fly at half mast tonight as we salute the incomparable Ace Of Spades.”

Lita Ford – “I love you Lemmy; a great human being and a man who changed the face of rock. Motorhead Rules! RIP Lemmy; You will never be forgotten! I love you my big brother.”

Alex Skolnick of Testament – "Sad news. Wish it was a hoax. Didn't know Lemmy well but said hello many times, always a gentleman & a legend. RIP."
Metallica – “Lemmy, you are one of the primary reasons this band exists. We are forever grateful for all of your inspiration. Rest In Peace. Endless Love & Respect.”

Judas Priest – “Words about Lemmy can never be enough so we will simply say farewell Lord Lemmy thank you for the music, the shows, the tours we did and the laughs and stories we shared - all of these and more will be cherished.”

Bill Ward of Black Sabbath – “Lemmy, RIP - so sorry you're gone. I stand with the countless souls who will miss you, and who love you very much.”

Geddy Lee of Rush - "So sorry to hear of the sudden passing of fellow Bass man, Lemmy...of Motörhead and Hawkwind before that. He was a true original....who lived to rock....RIP Lemmy!"

Paul Stanley of KISS – “Lemmy Kilmister Motörhead has passed away. Truly one of a kind. Much more to him than many knew. RIP.”

Manowar – “Lemmy was a great Bass Player, Song Writer and most of all a friend. To say he will be missed is an understatement. He was and will always be a Legend.

We will never forget you and the good times we had on the road. We Hail You !”

Voivod – “It is with great sadness that we learned of the passing of one of our heroes. Rest In Peace Lemmy.”

Queensryche – “We just heard the horrible news. Our heartfelt condolences go out to Lemmy Kilmister's family, friends, all his Motorhead family and fans. RIP.”

Corrosion Of Conformity – “Going from "Happy Birthday, Lemmy" to "Lemmy, Rest in Peace" in the course of a few days is pretty brutal, not to mention a world without Motorhead looming ahead. Let's take this opportunity to crank some music that will live forever.”

Black Stone Cherry – “So sad to hear about the passing of Lemmy. We are so honored and lucky to say that we had the privilege of touring with Motörhead thru Germany in 2009. What an incredible tour that was...”

Steel Panther - "The ultimate rockstar. The ultimate party. You are and will forever be missed Lemmy."