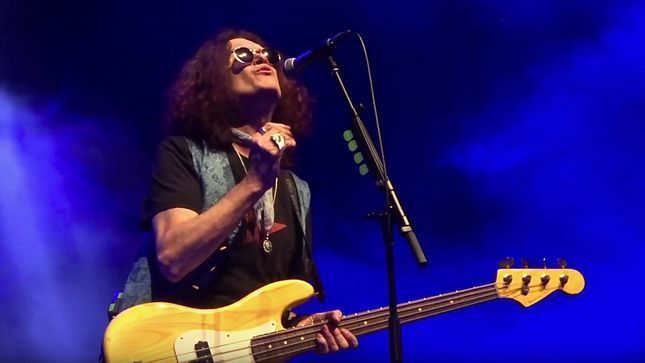 Russian news publication TASS recently spoke with Glenn Hughes about his upcoming world tour and the possibility of new music somewhere down the line. Following is an excerpt from the story.

Talking to a TASS correspondent, Deep Purple’s former bassist and vocalist Glenn Hughes said that the current members of Deep Purple tried to stop him from performing the band’s songs but could not because he wrote or co-authored many of those hits.

"The Deep Purple you know of with (Ian) Gillan, (Roger) Glover and (Ian) Paice are very upset with me because I’m doing this. They are upset that Glenn Hughes is doing this show but Glenn Hughes is the writer of these songs. He is not calling it 'Glenn Hughes’ Deep Purple', he is calling it 'Glenn Hughes performs Deep Purple'. They have tried legally to stop me and they can’t. The songs I’m doing, they don’t do. The songs that I am doing, fans around the world want to hear. They can be as mean as they want I am smiling and…I’m not going to stop," Hughes said.

Planet Rock has started a 48-hour pre-sale, here, and tickets will go on general sale on Friday, October 5th via thegigcartel.com.

The eight date UK 2019 tour promise to be a dynamic, turn-back-the-clocks, two-hour live extravaganza homage to his tenure in MK 3 and MK 4 incarnations of Deep Purple - one of music history’s most seminal and influential rock and roll groups.

Deep Purple took a quantum leap when the then 20-year-old Glenn Hughes was seconded from British funk-rock outfit Trapeze in mid-1973. As bassist and co-vocalist (with David Coverdale), he helped steer the legendary rock group in the progressive direction of Burn (1974), Stormbringer (1974) and Come Taste the Band (1975), while touring the world for three years.