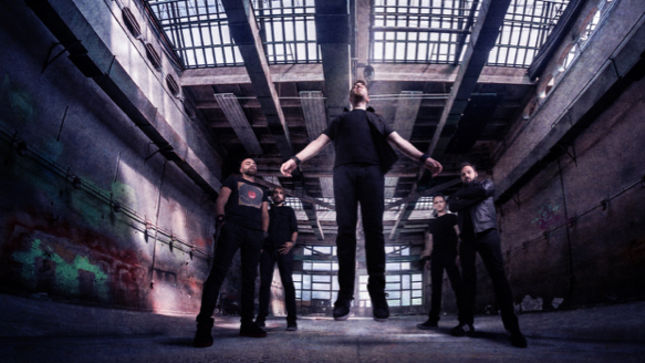 The ten tracks were produced and engineered throughout 2014 by bassist Alex Pascu at Traian 150 Studios in Bucharest, Romania. The band then left for the picturesque island of Santorini to mix the album at Black Rock Studios, with the help of veteran mixing engineer Kostas Kalimeris, who worked with artists like Bring Me The Horizon, Steve Harris and Joe Bonamassa. The record was mastered by Svante Forsbäck (Rammstein, Volbeat, Amorphis) at Chartmakers Mastering in Helsinki, Finland.

The cover artwork was painted in watercolor by artist Radu Damian, for an astonishing retro Sci-Fi look.

Alex Pascu, about Mantras Of War: “We didn’t make any compromises on this record. The tracks have a very organic sound, thanks to the analog equipment used in all production stages. We wanted to avoid the lifeless and loudness-war-ridden sound that plague some of the current metal records and create a wide sonic spectrum that emphasizes the incredible energy of these new songs.”

“We’re extremely excited with the result!”, adds Andrei Găluț, the band’s singer. “I think the band has a tighter and more mature feel on Mantras Of War. After three years of playing together, we’ve managed to get a better perspective of where we wanted the new stuff to go: faster, more aggressive songs, yet retaining the melody and catchiness we had on our debut album. The tracks are very challenging to play, but we can’t wait to take them out on the road and check out everybody’s reaction!”

Vlad Busca, the label’s representative, declared: “Goodbye To Gravity is for sure one of the most promising bands on the local scene, with a distinct sound on both live appearances and studio recordings. We crossed our paths several times during the years and I always admired their ambition and professionalism, therefore the label’s decision to sign them was a very easy one to make. We hope that this collaboration to be a step forward for all the parties involved.”