GRAHAM BONNET Pays Tribute To Late RAINBOW Drummer COZY POWELL On His Birthday - "The Greatest Drummer With Which I've Ever Played; You Will Never Be Forgotten" 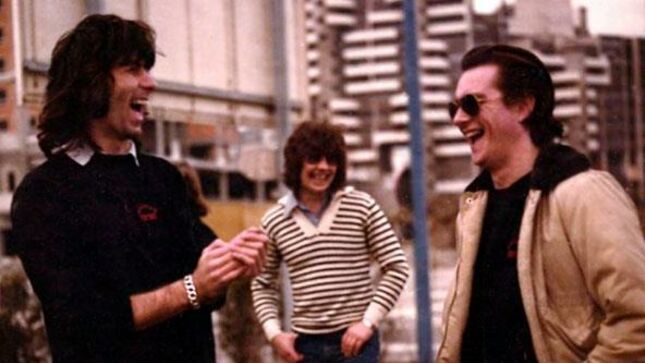 "It's hard to wish Happy Birthday to someone who is gone. Every year on this day (December 29th), I am consumed by sadness and yet can't help remembering Cozy with a smile. He was one of a kind; smart, funny, kind and the greatest drummer with which I've ever played. I remember getting the call from Don Airey saying something like 'It's the old boy. He's gone.' After he explained to me what had happened and when I finally finished crying, I opened up the back door and looked out on to the mountainside where there was the most vivid double rainbow you could imagine. I said to myself 'Is that you, Cozy?' I was filled with a sense of wonder. Nothing would ever be the same and I miss Cozy as much today as I did on that day in 1998, but I am so lucky to have had the time with him that I did. Happy Birthday, CP. You will never be forgotten.

If anyone has any photos of Cozy and me together, please post them here. I would love to see them. Thanks!"

On Saturday, August 16th, 1980 Rainbow took to the stage to headline the first rock festival to be staged at Castle Donington. It was the culmination of the band’s tour in support of the hugely successful Down To Earth album, released in 1979, and would prove to be the last live show featuring this particular line-up of the band: Ritchie Blackmore (guitars), Don Airey (keyboards), Graham Bonnet (vocals), Roger Glover (bass) and Cozy Powell (drums). The set featured tracks from the new album alongside classics from earlier in their career. There were virtuoso solo spots for Blackmore, Airey and Powell which served to highlight the sheer musical prowess in the band.