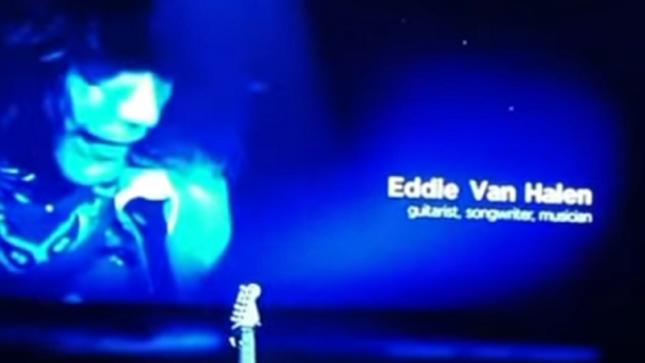 During the In Memoriam section, The Recording Academy paid tribute to musicians who died in the past year. At one point during the segment, legendary Van Halen guitarist Eddie Van Halen's name appeared on the screen, along with a short clip of the exemplary musician playing his "Eruption" solo live, while a spotlight shone on his iconic Frankenstrat guitar. The negative backlash to such a minimal tribute for an unparalleled innovator, songwriter, and performer, was immediate and severe.

Grammy executive producer Ben Winston was recently interviewed by Jem Aswad of Variety about the broadcast, including his thoughts on the highly controversial tribute to the late, great Eddie Van Halen. An excerpt follows:

Do you think the “In Memoriam” segment, which is always a challenge but especially this year, was successful, even though many fans seemed to think that Eddie Van Halen didn’t get enough of a moment?

Winston: "We had the idea for it for a long time, because I thought it was great that we could go from Little Richard to Kenny Rogers to John Prine, and it could be brilliant musicians playing for each other, and I think it really resonated with people. The regret I have is that I think 970 names were submitted for 'In Memoriam' this year, and you can only put… usually it’s 35 to 45 and this year we did 60. I wish we could have done more.

As for Eddie, we had a call with [Van Halen’s son] Wolfgang’s rep before the show, and I asked if he’d be willing to come on and play. He said he didn’t really want to do that, and I offered up eight or nine guitarists who maybe could. But instead, he felt like we should play a video of Eddie himself, because nobody could play like him, so that’s what we did. I would have loved for it to be longer than it was, but Eddie was the only person in the whole 'In Memoriam' to play their own music, with no other faces being seen. I felt that was an appropriate tribute to him, but if Wolfgang didn’t, I’m sorry about that, of course — it’s such a horrific thing to lose a parent. We did the best that we felt we could."