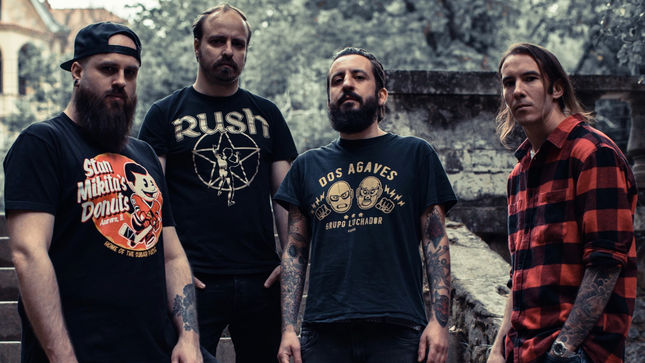 Athens, Greece-based prog metal band, Calyces, have released their debut album, Impulse To Soar. Order the album here, and watch a video for the track "The Great Void" below.

Calyces is the latest sensation of the Athenian prog rock/metal scene, built around Manthos Stergiou, the vocalist, guitarist and main songwriter in the acknowledged prog metal band Tardive Dyskinesia, who in their long years run achieved international status and released four full length albums to critical acclaim. Up until they went into a indefinite hiatus in 2018, they played numerous live shows throughout Europe and participated in landmark festivals alongside the most prestigious progressive metal bands such as Meshuggah, The Dillinger Escape Plan, Leprous, The Ocean, Intronaut, to name a few.

Moving on to new ventures and with 2018 as a starting point, the compositions of Calyces’ debut album, Impulse To Soar, have been drawn by Manthos who took over vocal and guitar duties, surrounded by a group of renowned Greek musicians and set to high standards of musicianship, forward-thinking perspective and surgical metal agility.

The album blends prog metal in the way it was shaped through the 00’s, with the finest elements of classic progressive rock from the 70’s, bridging the most important areas of the thinking man’s music. In their running time these 10 tracks feature  sweeping low tuning heavy riffs with a barrage of polyrhythmic parties, alternated with atmospheric passages emphasising on groove, melody and energy through the lens of an accurate songwriting.