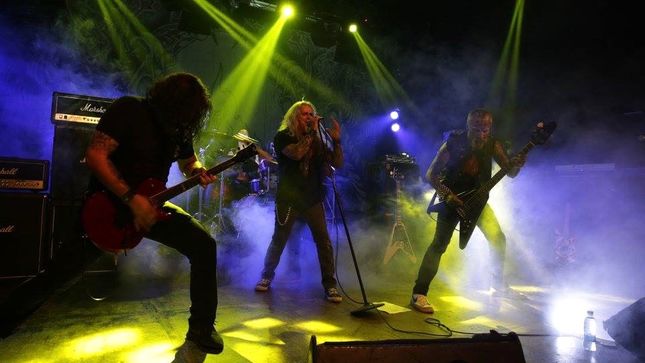 A first listen to what Pyramid Of Terror holds in store can be heard now as the band releases the ominously-titled track "Black Magic Tower"; stream it below.

Approaching a full forty years on from 1980 - arguably the greatest year in metal's history - it can be vanishingly difficult in the here and now to find bands who can summon up the true elixir of traditional heavy metal in all its gory glory. Certainly, there have been manifold variants of this supernatural force in the last four decades, yet for all the power-metal diversions and Pro-Tooled machinations that have crossed our consciousness, the blood-simple formula of steel-plated grandeur and street level grit remains mystifyingly elusive for even its most long-standing proponents.

Lucky for everyone then, that the Cypriot denizens of darkness, Mirror, have returned! Mirror’s second album sees the band building on the heroic vibrations of its self-titled 2015 debut, summoning forth nine triumphant anthems that are equal parts lethal and life-affirming. Deftly avoiding the lure of pastiche and parody, Pyramid Of Terror arrives at the cusp of an audial era in which the widescreen sweep of late-‘70s rock, a la the cinematic splendor of Dio-era Rainbow, crosses swords with the stripped-down panache of the NWOBHM - somewhere akin to a danger zone between first-two-albums Iron Maiden and the occultist allure of debut Angel Witch - to set passions dramatically ablaze.

From the "Balls To The Wall"-styled intro of the opening title track, via glorious fist-shaker "Running From The Law" to the B-movie vibrations and epic palpitations of "Black Magic Tower", this is a more charismatic and potent group, confident in the bravura showmanship of their delivery and alive with vibrant chemistry. Utterly devoid of irony or nostalgia, Pyramid Of Terror is no less than a transmission straight from the heavy metal motherlode, and a glorious testimony to a spirit that will doubtless outlive us all.