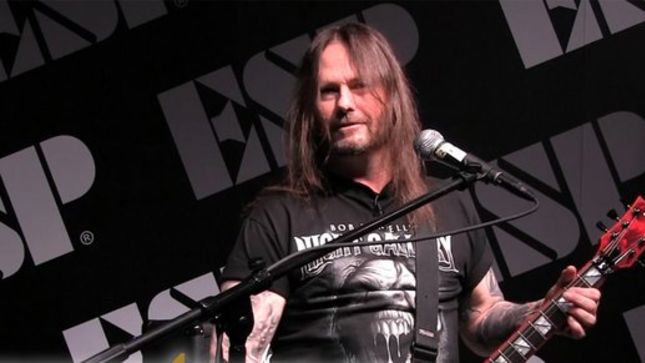 Gary Holt of Exodus and Slayer recently discussed being a member of two major metal bands with Ultimate Guitar correspondent Justin Beckner. Following is an excerpt from the chat:

"Sometimes I just want to relax but I'm not too good at sitting around doing nothing. I've been doing a ton of stuff today already and its only noon. I get up earlier than most people - I like to get a jumpstart on my day.

We'll have a tour coming up at the end of the year that's in the works right now to close out that album cycle. I kind of got the first tours for the record done a while ago and we have some more cities we need to hit. But I've been writing a lot for the past several months for the new Exodus record which we hope to get into the studio late fall or something like that.

We've got quite a lot of stuff done and Tom (Hunting / drums) and I have been jamming in the six months off we've had between Slayer tours. So we've been making some good headway."

In a new free guitar lesson video, Holt shows the correct way to play the Exodus tune “Fabulous Disaster”. Every guitarist thinks they know how to play the first few riffs, now you can school them!

Check out the lesson at this location.

PlayThisRiff.com is owned and operated by Bob Balch from Fu Manchu.