Guitarist ROWAN ROBERTSON On Meeting YNGWIE MALMSTEEN During DIO's Lock Up The Wolves Tour - "He Told Me I Reminded Him Of JOHN NORUM; That Was Nice To Hear" 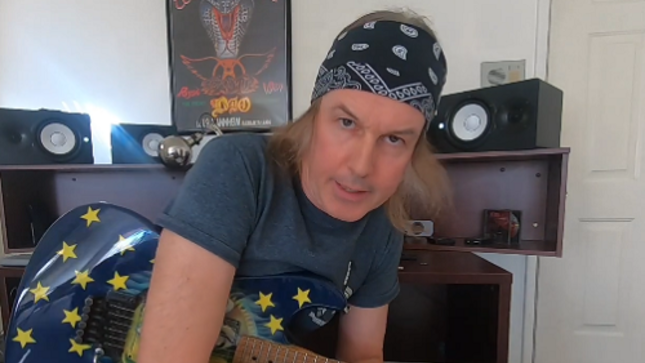 Former Dio guitarist Rowan Roberston guested on the 80's Glam Metalcast to discuss the curent projects he has in the works, as well as look back on his time working with Ronnie James Dio. Check out the interview below.

Robertson joined Dio at age 17 and recorded Lock Up The Wolves with the band, released in 1990.

Looking back on his days in Dio

Rowan: "I look back very fondly on it. It was an easy, fun time. I feel so fortunate to have played with him. When we did the audition we played 'Holy Diver' and 'Last In Line' and all that, then we jumped right into writing. I told him I wasn't sure if I could write. Ronnie told me, 'Don't worry, it's going to be fine.' I think he used the group as a tool to write with. We would play like 10-20 riffs and then he would find one that he liked. We really pieced the songs together slowly. He was an amazing craftsman and great writer. It was great fun."

About the bluesier sound on Lock Up The Wolves

Rowan: "Ronnie wasn't shooting for a bluesier album. I remember he said, if you have a riff and you want to know it if can work for Dio - if can picture someone in the front row raising their fist in the air to it, then it's a good one. Even though I was a shredder and a metal player, my first influence was Hendrix, so I was very bluesy. Looking back, it was a different sound on that album. There were certain things Ronnie wanted to hear from me and I don't think I could really deliver on some of them at that point. With time, I've become a better player and have more understanding of what he wanted. I think he dealt with what he had in me and made album which ultimately came out more bluesy."

About being 18 years old out on tour with Dio

Rowan: "The tour was a year long total party. Every night on the bus was crazy, it was great. Even though I was younger than them, everyone was completely cool to me. I so naive that I probably wouldn't have noticed if they had a problem with me. We toured with Yngwie (Malmsteen), which was crazy because I was such a big fan of his, and suddenly he's the support act for the band I'm in. I remember walking by his dressing room and he was playing guitar. I went in and watched him. Then he handed me the guitar and I started shredding. He told me I reminded him of John Norum. That was nice to hear."