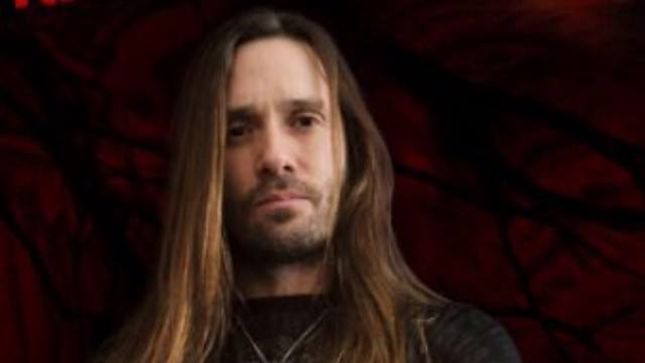 Caleb ‘Sick’ Smith of Heavy Metal Thrash, The Sick Room podcast in New Zealand recently conducted a video interview with shred guitarist Rusty Cooley who exclusively revealed that he got the call from Megadeth leader, Dave Mustaine in January while they were in search of a new guitarist.

Rusty: “Right after I got home from NAMM, it was a January (Sunday or Monday night), I got a call from my artist rep saying, ‘Hey, uh you need to call this number tomorrow, it’s very important and it’s going to be potentially life changing and I can’t tell you who it is’.

“So, I was like ok, yeah great!, (I kind of had an idea on who it was), and I get up the next morning and it’s Justis Mustaine (Dave Mustaine’s son) Justis and I talked for a few minutes and then he says ‘Hey man, I’m kind of busy, can I call you back later’ and I said yeah dude, no problem. (I was really sick when I got home, so it was hard enough for me to get up and call him, I got what they call ‘Namm-thrax’ – getting sick after Namm.

“So, a couple days goes by, and I hear from Justis the next day, and I text him, then I don’t hear from him for a couple more days, and then Thursday night I call from my artist rep, Josh and he’s like ‘dude, what the-hell-man, Mustaine’s been waiting for you to call him all week’ and I was like dude, you gave me Justis’ number, and that’s all I got man’ so then he goes ‘okay, Dave wants you to call him tomorrow’ and so I call Dave, and he had actually ended up being at a concert , and said ‘Let’s talk tomorrow’ and so I talked to him, (I wasn’t actually able to get on the phone with him for a few days, because I was so sick and couldn’t actually speak, so we spent a few days talking by email).

“Initially, I was like oh shit, I need to do this because it’s Megadeth, and it’d be great for my career, and what not. I was learning songs, and I was going to do it, and I don't, the more I started to think about it I kind of started second guessing myself, because I started to realize that I didn’t think I was doing this for the right reasons. I didn’t think I was doing this because I wanted to do it, but because that’s what I thought everybody around me wanted to do, including the companies I work with and my friends and family around me wanted to see me succeed at a higher level. On top of that my relationship with my daughter is much more important. She’s 15, going on 16, and if she just moved in and I take this on I’ll miss the most important years of her life, cause I’ll be on the road touring with Megadeth, and she’ll be going off to college.

“It’s not say that I’m not going on to tour, and do things, but, the amount of touring involved in Megadeth would just be too much for me right now and I struggled with this for a while, because Megadeth was a huge offer I’d always been waiting for my time to ‘get the call’ for something big.

“So I decided not to do that, because I’ve always done things for myself, and I did struggle with it for a while, but I’ve never played other people’s music, or played in a cover band ever, and that’s not to say Megadeth are a cover band, not to misconstrued that in the wrong way, but I would be going in to this band playing 20 years’ worth of somebody else's material, and the only thing I would get to do is maybe contribute to a few solos on the new record, and I would just have to sit on this stuff and play Megadeth songs, and usually with a band like that kind of history, you wouldn’t get to play many new songs, because the fans would want to hear the older stuff and in the long run, that doesn’t appeal to me, and no amount of money could make that better, I was put on this planet to do my own thing.”