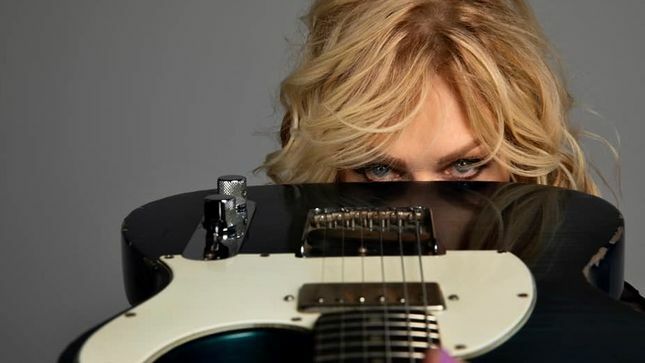 Guesting on Hawaii Public Radio with host Dave Lawrence, Heart guitarist Nancy Wilson offered up some details of her forthcoming solo debut. You And Me. One of the tracks is a tribute to Eddie Van Halen.

Nancy: "I have an instrumental song on this album called 'For Edward', which is dedicated to Eddie Van Halen, obviously, because it's a story about I was the first one to ever give him an acoustic guitar. When we were touring with those guys (Van Halen) in the '80s, he was, like, 'I like how you play that acoustic.' And I said, 'Well, why don't you play more acoustic?' And he goes, 'Well, I don't have an acoustic.' And I said, 'You don't have an acoustic? What?' And so I went and got him one out of my stash and I gave it to him. Early the next morning, in the hotel, back when people would ring your room, he rang my room and he played for me this beautiful piece of acoustic guitar instrumental music on the phone. I was so touched, and it was so beautiful, it was one of the prettiest things I'd ever heard. So I tried to return the favor by making a beautiful little tribute to him."

Ahead of her first-ever solo album, Nancy decided to release her stunning version of Bruce Springsteen’s “The Rising”, “...because of these troubled times we’re living in,” Nancy says. “‘The Rising’ has been on my mind. I wanted to make something uplifting and aspirational for those of us who are suffering with all this sickness and loss. I hope this song can help lift our spirits.”