HEAVY PETTIN’ To Release "Best Of" Album In November 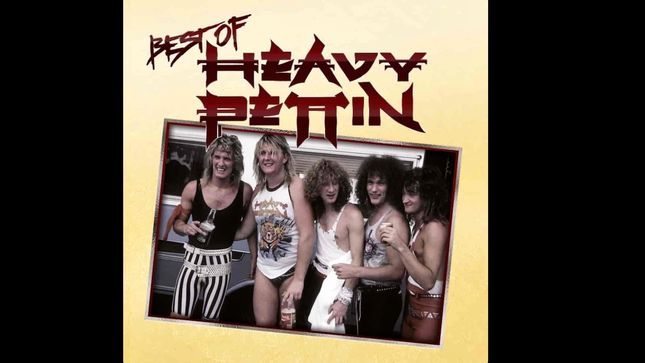 Hard rocking Scottish band, Heavy Pettin', will release their Best Of album on November 27 via Burnt Out Wreckords/Cherry Red. Featuring 14 tracks, this is a collection of songs chosen from their three albums re-released in November 2019. The songs reflect Heavy Pettin at their best... including the singles that charted: "Love Times Love", "In And Out Of Love" and "Rock Me". Pre-order here.

The cover is a previously unseen photo by David Plastik, taken at The Louder Sound festival in France in 1984. Other unseen photos of the band have been used to showcase HP at their prime. The Best Of Heavy Pettin album features liner notes from Ross Muir of FabricationsHQ.

Heavy Pettin (named after UFO's 1976 studio album) was formed in Glasgow in 1981 when guitarist Gordon Bonnar, drummer Gary Moat, bassist Brian Waugh, vocalist Steve 'Hamie' Hayman and lead guitarist Punky Mendoza joined forces to give the biggest and best rock bands at the time a serious run for their money.

Heavy Pettin gigged extensively before releasing their debut single, 1982's "Roll The Dice" on Neat Records. This was good enough to catch the eye of Polydor Records who soon extended a major-label deal to the band then, with Queen guitarist Brian May on board as co-producer along with Reinhold Mack, the group recorded their 1983 debut LP, the classic Lettin Loose. Opening slots supporting the likes of KISS, Ozzy Osbourne and Whitesnake followed, leading to the release of the band's second studio release, 1985's Rock Ain't Dead. The group dissolved in early 1988 with their third and final album was issued the following year under the title The Big Bang.