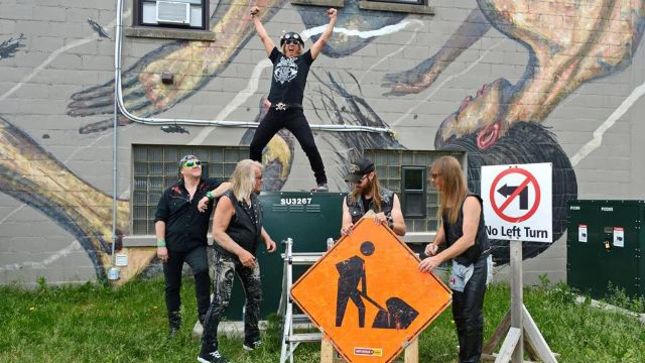 "I want to post this before rumors start flying around," says Helix frontman Brian Vollmer.

"This morning, shortly after I had just posted a video from yesterday's practice, I received a phone call from (Helix drummer) Fritz's girlfriend Traci. Fritz had gone out to the front of the house to fix some shingles on the roof. When Traci's sister went out to check on him he was laying on the front lawn, having fallen from the roof. Luckily, one of the first two people on the scene was a nurse, who immediately phoned 9-1-1. He had a seizure on the front lawn and then another on the way to the hospital in Hamilton. They immediately put him in a drug induced coma with breathing tubes down his throat."

"Over the course of the day I started to receive as much info as the doctors were giving Traci.  It was a day of crying, pacing, and praying. He had hit his head pretty hard on the way down and who knows what else he hit as he fell."

"About an hour ago Traci phoned me to say that the doctor had told her the injuries are not life threatening (they think) but regardless, he will have some serious re-hab in the future. He fractured his skull and crushed a few vertebrae. The doctors are keeping him in a coma and on breathing tubes until they feel he's alright to come out of it. He's also moving his legs - a good sign."

"Please pray for Fritz tonight everyone! This weekend will still go on with Jamie Constance from Syre filling in on drums. I will keep everyone updated on how Fritz is doing. Get Well my brother."

This weekend's Helix shows are as listed: