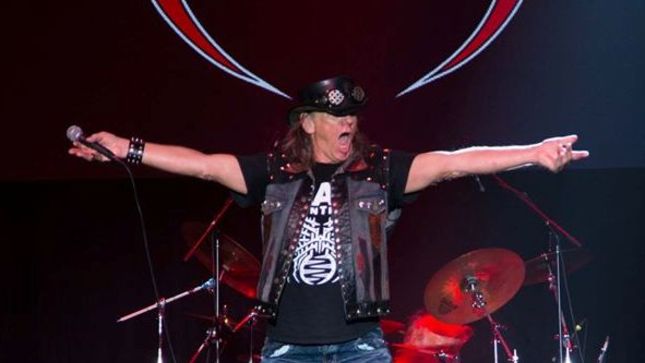 Helix frontman Brian Vollmer has unearthed another gem from the archives. Check it out below.

Vollmer: "Wow! The Old El Macombo (in Toronto) is opening again with Big Wreck playing. Helix played there once for the CHUM live radio broadcast. This was a year before we were finally signed by Capitol / EMI We were still playing songs like 'Crazy Women', 'White Lace & Black Leather', and 'Heavy Metal Love'. The place was packed and the recording sounded great on the airwaves. I have most of this recording; does anyone out there have the whole thing? Here's 'Women Whiskey & Sin' from that night. This song was on the White Lace & Black Leather, album which became a #1 British Import in Sounds Magazine. I stole the chorus from the Styx song 'Born For Adventure'."

Helix recently released the Eat Sleep Rock CD on Perris Records, a compilation album with some of singer Brian Vollmer’s personal favorite songs recorded since leaving Captiol/EMI in 1990. The album was recorded at bassist Darryl Gray's own Dawghouse Studios, mixed by Siegfried Meier and mastered by Harry Hess (Harem Scarem). The artwork was done by ex-Helix guitarist Brent Doerner with photos by Victor Azziz Studios. "Brent is a very creative guy," states Vollmer. When he was in the band writing songs, he was with us for I think 16 or 18 years. I've always found him as a person who thought outside the box when it came to creativity so it's great still having him involved with Helix projects. He's like a 6th member."

Eat Sleep Rock adds the new track "Eat Sleep Rock" and includes "The Story Of Helix," a rap that Brian wrote a couple of years ago to kick off the acoustic show. "Eat Sleep Rock" is the first to feature new Helix guitarist Gary Borden, a veteran of the Canadian music scene who has played with Sass Jordan, Toronto and The Guess Who, worked with Gowan, and fronts his own original act Blood Of VanGogh. Brian continues, "Kaleb left last year, he was a solid member for over 10 years and he is still involved with the band writing for the next studio album. Gary is a great guy and he fits right in. It's great having guys with personalities like Gary and Chris (Julke, guitarist) to bring you up as it's tough when you are out there doing it all weekend long, travelling, playing, getting up early and flying. I got a great bunch of guys behind me."

For anyone that missed the August 14th BraveWords video premiere for "Eat Sleep Rock", check out the clip below.

Keep up to date with all things Helix in their newly designed website at Planethelix.com.