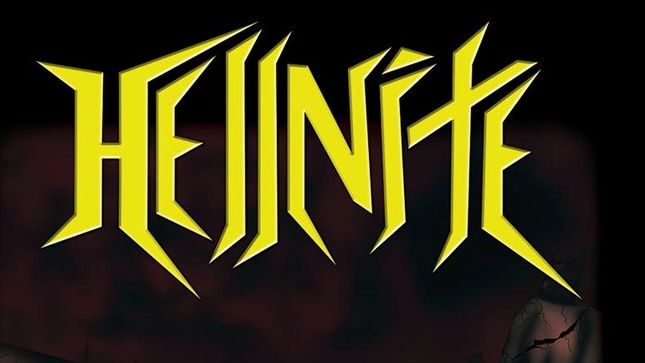 Thrashers Hellnite have announced they will be embarking on their first ever Western Canadian tour since band founder Paolo Belmar relocated himself and the band to Edmonton, AB from Mexico City. While setting up the band again in Canada, Belmar was backed by Canadian musicians, but for this tour, he will be joined by original bassist Luis “Chaps” Mora and drummer Mauricio Salas for the road adventures through the Canadian Rockies and Prairies. The six-date "Midnight Terrors Western Canadian Tour", which is in support of the same titled album the band released earlier this via Sliptrick Records, will be kicking off in Edmonton on June 21st and ending on July 5th in Regina.

Each member had this to say about their first venture touring Canada.

Paolo: "I’m excited in general, not sure what to expect but I’m sure we’ll do our best. This is our first tour out of Mexico and having my old pals with me again makes me feel confident and I know we will have fun playing together as a band rather than just do it because I already started this and I have to finish it (as I was doing when the album was released), it feels really good to have the original lineup together again."

Chaps: "I’m excited because it was a long time without playing with my best friends and doing this project together. We will put our whole hearts to make you feel the power of a Mexican Metal band."

Mauricio: "To be honest, I'm nervous because it's my first time playing in Canada but I'm pretty sure that every single night of the tour will be a night to remember! So, be prepared to feel the Mexican power!"