HELLOWEEN - “Skyfall”: Behind The Scenes, Part I; Video 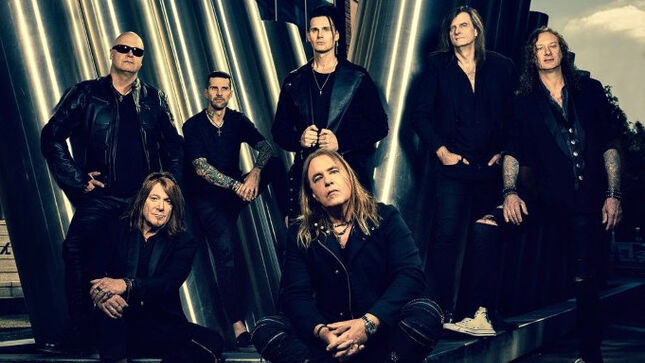 Helloween are back with the spectacular single "Skyfall", to be released on April 2. The band have released the new video below, stating: "We're just getting started: Photographer Martin Häusler caught up with Helloween for the official 'Skyfall' photo shooting. Get a closer look on what's to come in this exclusive making-of!"

In a previous video, singers Michael Kiske, Kai Hansen and Andi Deris sit down to discuss the idea behind the "Exclusive Alternative Vocals Mix" and why there's going to be three versions of the song.

The epic 12 minute song, written by Kai Hansen, will be released in two versions: The A-side features the 7 minute single edit and the B-side explodes with a 12 minute alternative version of the album track with a new mix and a different singer allocation - available only on this very single. The second edition will offer "Indestructible" as the B-side, another precursor from the album. Limited availability, on vinyl only with premium packaging.

The "Pumpkins United" lineup of Helloween have been working on their yet to be named, new album. The record will see the boys going “back to the roots,” with the band recording fully analogue and Dani Löble  drumming on Ingo Schwichtenberg’s original drum kit, as used in the legendary Keeper Of The Seven Keys recordings.

Due to the COVID-19 pandemic, Helloween were forced to postpone the United Alive European Tour Part II. Initially scheduled to take place from the end of September until mid of November 2020, the tour has been rescheduled from April to June 2021. Dates below.