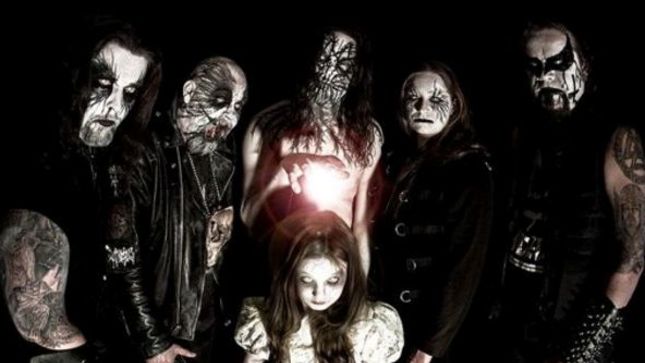 BraveWords has received some unexpected praise from close to home - Hexenklad / former Eclipse Eternal frontman Voldemars (second from the left) - that we'd like to share. Read on:

"If it were not for BW&BK - Brave Words & Bloody Knuckles (now Bravewords.com) - there would not have been an Eclipse Eternal. Certainly not the Eclipse Eternal you all now know. How’s that for a headline?

There have been many individuals, groups and organizations who have made a positive impact on me over the years and I think it is of great importance that on occasion, I shine a spotlight on them as my way of saying thanks. So, first up, BW&BK:

Back in 2001, I put an ad in a Musician’s Wanted magazine in Toronto (which I got from Steve’s music on Queen) and guitarist 'Lord Abaddon' aka Rick contacted me. We met at the old Katacombes (on Queen St). He showed up in a Dark Funeral shirt and big boots and we immediately hit it off. Our goals were the same as were our influences. He was a serious guy and I was a serious guy, and we both wanted to have a serious band that made Symphonic Black Metal. He became our guitarist shortly afterwards and the rest is history. But it was Bravewords’ Tim Henderson who introduced Rick to Black Metal in the first place. It was him who lit the flame that would result in the creation of four full length albums. It was also through the publication BW&BK (which I used to buy at 333 Yonge St almost every month) and the Knuckletracks CD that came with it, that I discovered half the metal bands I know and was / am influenced by. It was through learning of those bands that I became the vocalist I am. And before I joined the cult of Facebook, I spent most of my free time on the Braveboard where I met many good friends and promoted upcoming local shows (ours and others) and learned about new local bands.

Over the years Eclipse Eternal was often in the pages of the publication (which had, in my eyes, a glorious history of promoting Canadian Metal to the world) and every single time it relit the flame in me. I will fully admit that it was fulfilling to see the band that was my life getting recognition, especially by a publication which I held / hold in such high regard. Every time we had a new release or a big show it would show up in the pages of BW&BK. And now, even with the new band I am in, Hexenklad, Bravewords is still right there helping me get the word out. For this I cannot thank them enough.

Thank you for the kind words, sir. Much appreciated.