HISS FROM THE MOAT To Release The Harrier Album In February 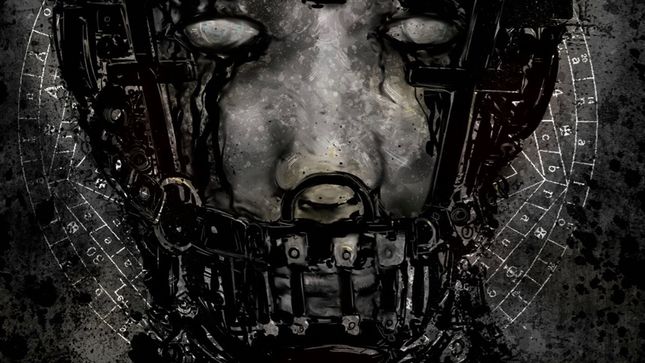 Hiss From The Moat - the transcontinental black/death metal band founded by acclaimed drummer James Payne (Vital Remains, Hour Of Penance) - will release their second album, The Harrier, on February 22nd via M-Theory Audio. The Stefano Bonora-designed cover artwork can be seen below.

The Harrier was recorded, mixed and mastered at Milan's SPVN Studio with Stefano Orkid Santi, who produced the latest Cripple Bastards album and previously worked as live engineer for bands such as Origin, Suffocation and Cattle Decapitation.

“The album was recorded as naturally as possible,” Payne explains. “Drums haven't been quantized since we wanted the listener to 'feel' the album rather than listen to it. We wanted to leave the natural expression of what we played reach whomever will listen to the album, because music and art produce energy, and that energy has to reach who's on the other side. All the modern productions in today's metal music are cutting that energy, and it was something we didn't want to be lost while expressing ourselves. We thank Stefano Santi from SPVN Studio for the amazing work he did recording us!”

Regarding the album's title, Payne says, “The Harrier refers to he who devastates. It's not intended as someone whom we created to destroy, but rather to indicate everything that has devastated our history, like politics, religion and dictatorship etc. That's why we used extracts of religious and political scripts in the lyrics.”

As for the cover, Payne says the following: “The artwork of the album is defined by three elements: a head of a statue that represents the blind and apathetic attitude of mankind; the mechanical mask on top of the head that represents the institutions that oppress people (similar to the belt on the statue's mouth and the crosses as blinders); and the alchemical circles that have the meaning of improving mankind through the mind and the body, to promote self-improvement without looking for external help.”

The US-based Payne formed Hiss From The Moat with two Italian friends - bassist/vocalist Carlo Cremascoli and guitarist Giacomo Poli - when he was just 18 years old. In 2009, the group self-released their debut EP, The Carved Flesh Message, which they supported by performing alongside the likes of Psycroptic, Skeletonwitch and The Black Dahlia Murder.

Four years later, Hiss From The Moat released their debut full-length, Misanthropy, via Lacerated Enemy/Nuclear Blast. The band's intense use of both extremes of death and black metal produced an album that stood alongside the delivery of acts such as Behemoth, Belphegor and Rotting Christ.

Following the release of the album, Hiss From The Moat embarked on an extensive tour across Russia, Europe and Asia, delivering aggressive and visually engaging performances backed by the blackened intensity of the band's new material. During this period, Payne left the legendary death metal act Vital Remains - a group he joined following a two-year stint with Italian death metal powerhouse Hour Of Penance - to focus full-time on Hiss From The Moat, and the band extended from a three-piece to a quartet with the addition of Max Cirelli (guitar/vocals).

Over the past two years, the band has toured extensively worldwide while working between the US and Italy to write The Harrier. Now, Hiss From The Moat aim to unleash another sonic onslaught that captures the band's range of death and black metal inspiration while creating a unique and intense presence in the world of extreme music.

A series of in-studio reports have been issued the last months showing the band at work in Milan recording The Harrier. View each at the group’s YouTube channel.

Pre-order Hiss From The Moat’s The Harrier on CD or limited-edition vinyl, here.

Hiss From The Moat are: