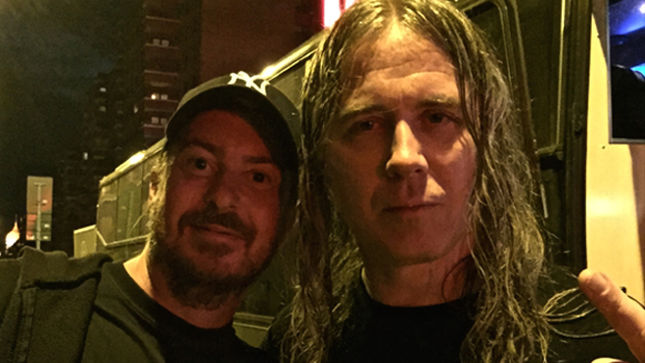 Since Eriksson was recently helped by iconic metal painter Joe Petagno for making the cover artwork of his latest paleo metal record, Primordial Rigor Mortis, he says that “since Joe made such an incredible job for that record I simply could not resist the idea of having also W. armstrongi, which was named after Alex Webster of Cannibal Corpse, portrayed by him."

To Eriksson’s great pleasure Petagno was as positive (and funny) as ever and happily accepted the commission while stating that, “this will be another fun escapade into the primordial sludge."

Now that the work has been completed, Eriksson says “I could not be more pleased with the powerful artwork, which to me epitomizes Petagno’s view of the beast from an otherworldly dimension."

Eriksson will use the artwork for an as yet clandestine project, hopefully to be revealed to the world next year. But the painting will also be included in the travelling Rock Fossils exhibition when it moves to Luxembourg on June 8th, 2018.

As an impeccable coincidence the completion of Joe’s painting also coincided with the species W. armstrongi very recently ending up on the PloS ONE Top 10 Open Access Fossils of 2017 list (http://blogs.plos.org/paleocomm/2017/11/27/top-10-open-access-fossil-taxa-of-2017/).