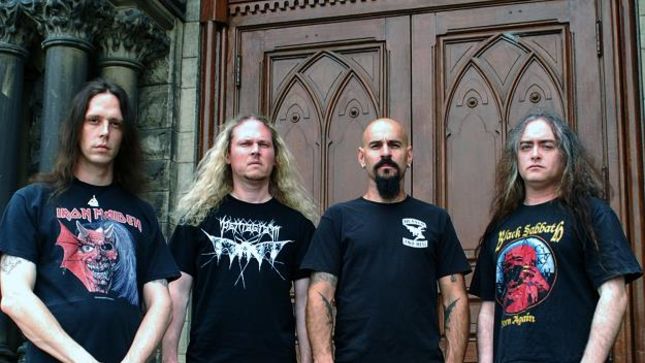 Relapse Records has announced that Incantation's 2000 full-length The Infernal Storm will be receiving the deluxe vinyl reissue treatment this November, Though first released at the turn of the century, The Infernal Storm has more than weathered the test of time and still stands as a punishing, top-tier extreme metal release today. Fifteen years since its release and since its first and only vinyl pressing, The Infernal Storm will now be repressed on Relapse 25th anniversary silver vinyl and black vinyl housed in deluxe gatefold packaging. The reissue will also include liner notes by the band's John McEntee, expanded artwork, and an album art poster.

The reissue is due out November 13 worldwide via Relapse. Preorders are available via Relapse Mailorder.

Incantation will also be playing two shows with death metal legends Autopsy this coming October and November, including an appearance at Housecore Horror Fest alongside Relapse artists Zombi, Agoraphobic Nosebleed, and Cripple Bastards:

The reissue of Incantation's The Infernal Storm is a part of Relapse's ongoing 25th anniversary reissue series, which is featuring numerous classic and long-out-of-print releases, many of which are being repressed on vinyl for the first time in a decade or more.